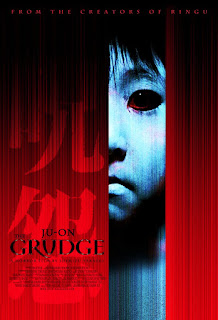 Rika Nishina (Megumi Okina) works as a volunteer for a senior health center. She is dismayed to find herself being sent alone to a client’s home, believing she is not ready to go alone. But she ends up going anyway. The house is a mess, and the woman she was sent to care for seems to be nonverbal.  While cleaning up, Rika hears a noise upstairs and goes to investigate. She finds a strange little boy, who says his name is Toshio. Wait, did he just turn into a cat?

Kazumi (Shuri Matsuda) comes home to find a messy house. She is annoyed because her husband’s sister, Hitomi (Misaki Ito) is coming for dinner. Kazumi’s husband Katsuya (Kanji Tsuda) is acting strangely, and he’s being no help. When Hitomi arrives, she can’t find anyone, and her brother’s mother-in-law is non-communicative. When she does find her brother, he is acting strangely and practically pushes her out the door. 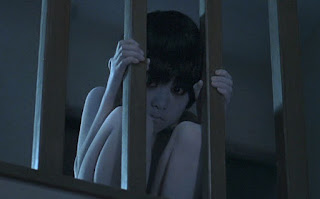 Something strange is happening at Hitomi’s work, and it’s unnerving her. Late at night, most people gone for the day, she encounters a ghostly figure in the ladies room and hurries to tell security. The guard assures her he will check it out and to wait there. She watches in horror at what she sees on the cctv. 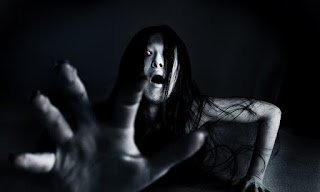 A young girl, Izumi (Misa Uehara) is walking home from school with her friends when she becomes frightened of a poster of three missing young girls. She hides away in her room, and tapes her window and draws the curtains, claiming that all three of them watch her! Turns out she knows more about the disappearance of her three friends then she lets on.

Ju-on is the original Japanese film that The Grudge was made from.  As the story unfolds, we see the story of this house from several different viewpoints until we get all the way back to where the grudge began. I think it’s more well-made than the Grudge, to be honest, and has a higher creepiness factor.  I plan to watch the sequels of each and will keep you posted. I’ll give this one 4 Stars. 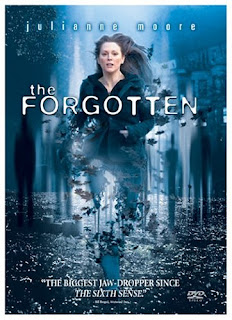 Although it’s been fourteen months since his death, Telly (Julianne Moore) just can’t let go. Every day, she goes to his room and looks at the things he left behind, looks through his photos and watches videos of him. But then one day, the pictures are gone, and the video has been erased.  She confronts her husband Jim (Anthony Edwards), who  refers her to her therapist, Dr. Munce (Gary Sinise). They both tell her that there is no child, she miscarried her pregnancy and what she thinks she knows are false memories. 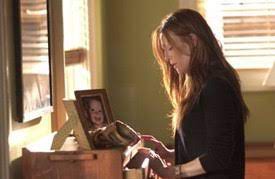 played together. Lauren was also on the plane crash that killed Sam, but Ash claims he has no daughter. A baffled Telly goes to his apartment, and uncovers evidence of Lauren. Suddenly he remembers.

Telly and Ash find themselves on the wrong side of the law. They try to convince Detective Pope (Alfre Woodard) that they aren’t crazy. When she goes to investigate, two men from the NSA try to take her case but she isn’t having that. What has the NSA to do with anything? Nothing federal here. 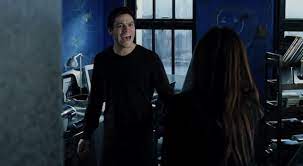 A strange man seems to be everywhere they are, and he tries to take them in, but they manage to escape. Telly and Sam come to the conclusion that no one would go to such lengths concerning dead children, so their kids must be alive. What is going on though?

For having such a good cast, and an interesting premise, this film simply falls flat. It isn’t bad, per se, but it really isn’t particularly good either. I believe these stars have given better performances, so I have to wonder what drew them to this script to begin with,. because it isn’t very good. Let’s look at this in some context. In 2004, Anthony Edwards was still starring in ER, so perhaps he was already anticipating his move to the big screen and didn’t care how he got there.  Julianne Moore had already done Hannibal by that point, as well as The Hours, so she shouldn’t have been exactly desperate for work. Maybe Gary Sinise wasn’t in big demand back then and thought why not?

I did watch the extended version with the alternate ending, which I have to believe is better than the theatrical. Still, the premise is somewhat predictable and yet leaves questions. Mainly exactly who and why. Unless you’re just a fan of these particular actors, I wouldn’t rush to watch this. I’ll give it 3 Stars because I do like Julianne Moore.