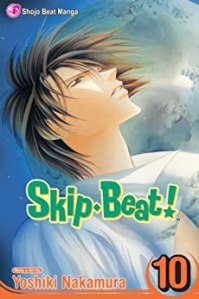 The remake of Tsukigomori is getting a lot of attention. Kyoko is worried about the director. He seems so frail, as if the weight of producing a better film than the original is getting to him already… and they haven’t even begun shooting! Kyoko makes the mistake of asking Ren if he is nervous, and he gets irate with her. She is reluctant to admit that one reason she took the role was for a chance to act with him and watch him act. At a press conference for the film, a reporter asks the director why he changed his name and he passes out!

Kyoko shows up on the set on her first day as Mio, having already been transformed for the role, complete with scar. Her make-up is so realistic, she frightens some of the actresses playing school girls! Mr Yoshiro praises her for acting so scary only to discover she was being herself. Ren wonders when she changed, and speculates that it’s all Sho’s fault. The actress who played Mio originally, Miss Iizuka, who is playing her mother in the remake, arrives on the set, and she is clearly angry with their choice of Mio. She thinks Kyoko is a no-one and doesn’t deserve to play Mio. She decides she needs to test Kyoko on the role, and if she doesn’t perform to her satisfaction, Kyoko will have to step down! Meanwhile, Sho’s agent is trying to keep Sho from learning that Kyoko has landed a role in Dark Moon. Luckily, he is often oblivious to his surroundings. The trouble is they are headed to the very station that is producing Dark Moon!

Kyoko has a sudden inspiration and tells Mr Yoshiro she’ll be back soon, dashing away. He chases after her but to no avail. This sudden departure just feeds into Miss Iizuka’s prediction of failure if they continue with Kyoko as Mio. But Ren is confident that she will return, he has faith in her. The director prays that he is right. Three hours pass before Kyoko returns – with dyed hair and a new haircut! One that exposes Mio’s scar! What can she be thinking? Will the old battleaxe get her way and have Kyoko removed from the cast?

I love to watch Kyoko grow as an actress. She is so intent and so serious, and determined to give everything her best. It was hilarious when Mr. Yoshiro told Kyoko that Ren loves her but she wasn’t even listening! Watching the director of the film grow a backbone and tell that old witch he’s in charge was great! Kyoko’s interpretation of Mio is going to put her on everyone’s radar, I’m sure! I’m curious to see what Sho’s reaction will be, now that he’s seen the Dark Moon poster. Will he want what he can’t have? He did say that he considers Kyoko his!  Looking forward to the next volume!