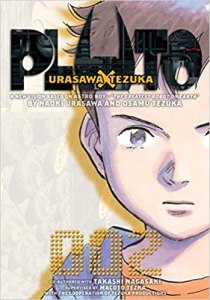 Investigators called to the scene of a collapsed old-style Japanese house find a dead man has been strung up there, two horns affixed to his head.  The victim is a professor of law, the same man who came up with the National Robot Laws. Superintendent Tawashi recalls there have been other recent cases involving horns, and decides they need to talk to the lead investigators on those cases. But, as it turns out, there is only one, Detective Gesicht.

Gesicht has gone to Japan to talk to Atom, a robot who looks like a little boy. The detective tells him that someone is targeting the strongest robots in the world, thus placing him in danger. Atom offers to swap memory sticks. At first, Gesicht is reluctant, then decides to trust Atom. Having seen Gesicht’s memories, Atom excuses himself to go the bathroom, to pretend to be more human, but once there he cries because of what he saw in Gesicht’s mind. On his return, he encourages Gesicht to take the trip to Japan he’s been planning with his wife, and he will gladly show them the sights. Gesicht says he might just do that.

Atom shows up at the police station, where Tawashi and Inspector Nakamura are examining the 3-D image of the ruined house. Atom offers to sift through the rubble and discovers something the others missed – two tea cups. Tawashi admits that traces of tea leaves and yokan were found in the stomach of the victim. Atom explains why he thinks there were two people, and at least one of them was human. Witnesses  reported seeing a huge tornado that seemed to target just that one house. Atom speculates on various gods of death and ends with Pluto. Finding a trace of ink on the victim’s hand, Atom investigates until he ends up with Professor Ochanomizu. He knew of Tasaki, the legal expert, and he had met Lanke when they were both part of the Survey Group! Atom warns the professor that he is in danger.

During the war, a group was formed to search Persia for weapons of mass destruction, but none were ever found. What they did find was thousands of discarded robot bodies buried beneath an old mosque. What did this mean? Meanwhile, in Istanbul, Brando manages to get ahold of his pankration suit, even though it’s not allowed for him to do so, but he gives the man a story of why he needs that and the truck and off he goes. Gesicht is in Greece, speaking with Hercules, when the latter realizes something is happening with Brando and urges Gesicht to quickly patch in, and also Atom. Brando! A monstrous tornado is attacking! They rush to help him.

In the aftermath of the tragedy, Gesicht decides to go ahead and book his travel to Japan. But something the travel agent says bothers him and he begins to doubt his own memories.  He goes to see Brau 1859, even as Hercules vows to find out what happened to Brando and to avenge his friend.

This is such a great story already! I know it has its origins in Astro Boy, but I’m unfamiliar with that so I can’t tell you in what way it was influenced. I might have to find that too and read it. But I do know Urasawa is a genius in the depth and complexity of his plots and characterizations. Only two volumes and I feel as if I know his characters, and I mourn the ones who have been lost. I hope there is justice in store and retribution against the perpetrator of these crimes.