It’s been a while since I talked about what I’m watching. Of course I can’t go back and  pick up what I missed, but I can move forward. Starting with my decision tonight to stop watching the Irregulars, a new Netflix show loosely based on the characters created by Sir Arthur Conan Doyle.

The Baker Street Irregulars are a group of street kids, led by a boy named Billy, who were utilized for their knowledge of London streets by famed private detective Sherlock Holmes and his sidekick Dr. John Watson. In this Netflix series, these kids are reimagined, with a young girl named Bea as their leader, and in this imagining we find a definite element of the supernatural. Edgy and youth oriented, I enjoyed it at first. After all, with sexy Royce Pierreson as Dr. Watson (last seen as Istredd on The Witcher), what can go wrong?

Sadly, a great deal. In this incarnation, they have completely changed Dr. Watson’s character, and are apparently portraying Sherlock as a weak, wasted drug addict (please don’t tell me he was an addict, he was high functioning and he did not spend time in opium dens). The straw that broke the camel’s back came when  I was about halfway through the fourth episode when  they introduced Inspector Lestrade as an utter asshole. I didn’t even care that they brought in one of Queen Victoria’s brood (the hemophiliac Prince Leopold) to run around with the group, although I personally don’t see that as ever happening. What I have come to realize is that this is Netflix’s version of any one of a number of shows on the CW – youth rules, age drools, that sort of thing. Bad enough what the CW did to Vampire Diaries, now Netflix is ruining Sherlock (and I won’t even consider watching Enola Holmes, not happening). So, it ends here. I can’t recommend this to anyone who enjoys watching or reading Doyle’s detective. Hard pass for me.

There is another book adaptation that Netflix is running. I just happened to read the book when I learned 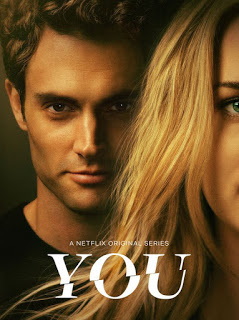 about the series. You is the series in question, from the book by Caroline Kepnes. Told in the first person, it’s about a guy named Joe who works in a second-hand book store and becomes obsessed with a young female customer who enters the story by the name of Guinevere Beck. The first book in the series is all about this relationship as we quickly discover that Joe will do what it takes to get what he wants, up to and including murder.

Luckily the book store owner, Mr. Mooney, installed a sound proof cage in the basement where he

keeps rare editions (although in the book, you have to take a ladder to get to them, in the series, they are reachable. Which is where Joe puts Benji, keeping him hostage until he dies from ingesting peanuts (Joe didn’t believe he had an allergy but by golly he did!)

Beck also has a very obnoxious, rich friend named Peach Salinger (yes, related to those Salingers), who is determined to win Beck’s heart (and body). Joe knows how to deal with her thought.  And then we have Beck’s analyst, Dr. Nicky, who is also (unknown to Beck) Joe’s analyst (played in the series by John Stamos). While he doesn’t die, he does end up framed for Beck’s murder. And that concludes the first book.

Now, the first season covers the first book, with some changes. In the book, Candace is dead. In the series, she comes back, and her characters is combined with Amy Adam. The second season, like the second book, sees Joe go to Hollywood where he meets Love Quinn and her brother Forty. But in this version, Joe takes the identity of a screenwriter, who he ends up trapping in the cage, now situated in a storage locker in LA) To be honest, I don’t know how that got there, but it did. 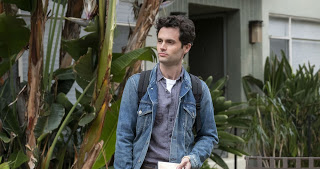 Other changes in the series include the addition of a young boy in the first season, Will’s neighbor’s son, who lives with his mother and her abusive boyfriend. In the second season, the writers gave Delilah a little sister, who is the object of the pedophile comedian Hendy, and Delilah is given more intelligence and less sluttiness, which apparently makes her less likeable too. I’m sure the writers had their reasons for this. I’ve finished the second book and am waiting on the third, and so far I am liking the series. Keep in mind, Joe is a sociopath. I think the addition of the young cast members was to instill some sort of humanity into someone who is a serial killer.

Okay, last show I want to discuss is Lilyhammer, another Netflix series. I recently watched the entire

Sopranos series, which I received as a gift for Christmas, and I loved it! I was sorry to see it end. Then one day I ran across Lilyhammer, which stars Stephen Van Zandt, who played Sil in the Sopranos. Of course I had to check it out!

Van Zandt plays Frank Tagliano, a New York mobster who testifies against one of his associates and demands the FBI relocate him in Lillehammer, Norway. One, because he saw the town during the Olympics and thought it was beautiful. And two, because it’s the last place in the world that anyone will look for him.

He is given the new name of Giovanni Henriksen, supposedly his father was Norwegian, but he likes to go by Johnny. Johnny has to learn a new language and a new culture in order to make his way in his new homeland. Of course, you can take the guy out of the mob, but you can’t take the mob out of the guy…

C’mon, is anyone really surprised? This is SIl we’re taking about lol

He’s intent on learning the language and studies diligently.  New in town, he meets single mother Sigrid Haugli (Marian Saastad Ottesen) and is attracted to her. He also makes some new business associates of his own and sets himself up in business. But his time as a wise guy is far from wasted as he uses his experience to get ahead in this new world he finds himself. in.

I have only seen four episodes but I love it already and am looking forward to more. Johhny, aka Stephen Van Zandt, is utterly adorable. There are lots of laughs, as well as some very romantic moments. Johnny’s next door neighbor turns out to be the chief of police, and she is very suspicious of him. In one episode, they decide he’s actually an Arab terrorist!  lol This series is fun for all.

All right, that’s it for now. I hope to talk about The Magicians soon (which I am rewatching) and Castlevania (which I will watch again since season 4 comes out May 13) and The Witcher (which I’ve seen six times now and have no idea when the second season is coming).