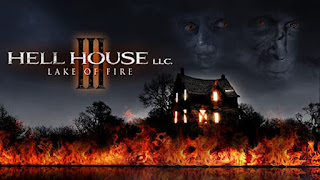 Nine years after the tragic events that transpired at the Abaddon Hotel, the hotel is slated to be torn down. But the last minute intervention of billionaire Russell Wynn (Gabriel Chytry) saves the hotel. He has decided it’s to be the site of his successful audience-interactive show Insomnia.  He invites journalist Vanessa Shepherd (Elizabeth Vermilyea) to bring a crew and film a behind-the-scenes documentary of the grand opening.

Russell’s team sets up as Vanessa’s crew films. Everyone has been given cameras which they are encouraged to use for additional footage for times when the crew isn’t around. Of course, everyone is familiar with the stories surrounding the hotel. But they’re just stories, right? And stories can’t hurt you. 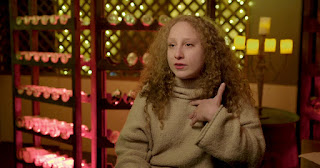 It begins not with a bang, but a whimper. Glimpses of half-seen figures. Movement where none should be. And of course, everyone is scared of the basement, where the horror occurred. Not to mention the creepy clown mannequins, which are still there and still creepy. Russell has given explicit instructions that no one is to go into the hotel at night. But some of the crew get to drinking, and dare each other to go into the basement. The only one brave enough (or is that drunk enough) to accept the challenge is Jane (Bridgid Abrams). But she quickly learns what a foolish mistake that was.

Russell’s show Insomnia is a modern-day rendition of Goethe’s Faust, which a man sells his soul to the 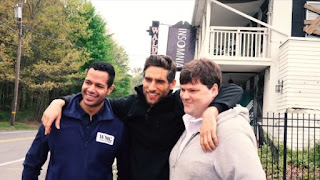 devil by making a bargain with him. People make such deals all the time, for different reasons. Does Russell Wynn have such a reason? Does it have anything to do with the horrific car crash he survived just a couple of years previously which left him with the large vertical scar on his face?

As the night of the opening of Insomnia nears, some of the cast and crew back out, afraid of what they have seen. But Russell is determined that the show must go on. However, at what price?

This is the third installment in the Hell House trilogy. Again, it consists of found footage from various sources chronicling the events leading up to one particular night. Compared to the first two films, it doesn’t have the same level of bloodshed (at least not until the end). But the creepiness factor is definitely there. Also, look for some by now familiar faces. I think the actors did a good job. All in all, it was worth watching. Is this the end of the series? I would think so, but you never know. I’ll give this 4 Stars. 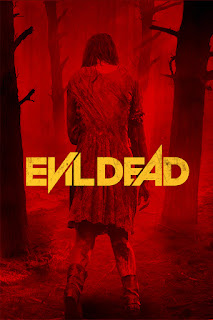 Mia (Jane Levy) has a problem with drugs, one her friends intend to help her with. Mia’s brother David (Shiloh Fernandez) and three other friends all take Mia to a remote cabin in the woods. Unbeknownst to David, they are determined not to let Mia leave, even if she wants to go home. They plan to see it through until the end. David doesn’t like that idea but he isn’t being given a choice.

The cabin hasn’t been used in a very long time. From the moment she enters, Mia complains of a bad 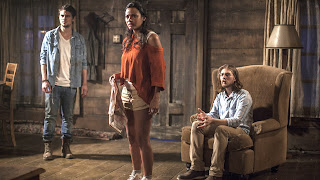 smell that no one else can smell. But then David’s dog scratches at a rug. They move it only to discover bloodstains and a trap door leading to a basement. And yes, something smells. They go into the basement only to discover that some sort of Satanic ritual was performed here.

As the friends predicted, Mia wants to back out shortly after arrival, but they aren’t having it. Eric (Lou Taylor Pucci) discovers a strangely bound package in the basement. Cutting through the wire that binds it, he discovers a book, bound in what seems to be human flesh. Opening the book, he makes out a few words, which he reads aloud. Huge mistake on his part. Now the trouble begins. 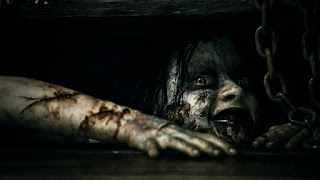 Mia is battling her inner demons, outside in the rain, when the summoned demon arrives and ends up possessing her. But her friends can’t tell the difference from Mia suffering from withdrawal issues and Mia possessed by a demon. And so people begin to die…

Let me start by saying Sam Raimi did it better. His movie was campy, sure, but it was funny, and you had to root for Ash (Bruce Campbell). I didn’t care about any of these people, to be honest. Now, if you like your horror filled with blood, then this might be for you. It’s full of it. In fact, I’d say this is not for the squeamish. At the same time, I have to ask how people keep losing limbs and never seem to go into shock or die from blood loss or anything, and in fact seem to take each amputation in stride.

Watch through the end of the credits (if you’re still watching by the time the credits roll) for a ten second cameo. All in all, I hope they don’t make a sequel. If they do, I don’t think I’ll watch it. I’ll give this 2.5 Stars, and a Razzie for worst performance by a demon.