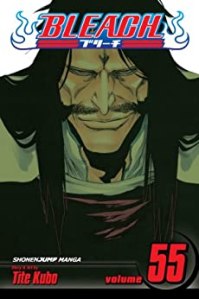 Hollows are beginning to disappear at an alarming rate. This is especially bad news to those in the Soul Society who monitor such things because of the delicate balance that exists between the Soul Society and the World of the Living. Should this balance be disrupted, well, the result would not be pretty. And Kurotsuchi has an idea who is responsible for this imbalance.

It’s Yuki’s first day on the job but he’s very tired, having been too worried to get much sleep the night before. He is yelled at by Shino, who tells him he has nothing to fear while she’s around and to pull his act together! They travel to Karakura Town to begin making their rounds. Yuki is dismayed that they are patrolling separately, especially when he runs into his first Hollows! And oh dear, they’ve got Shino on the ground, unconscious. What’s a new guy to do? Luckily for him, the Deputy Soul Reaper arrives to save the day!

Yuki awakens a day later to learn he missed the battle. While Ichigo is trying to get the new Soul Reaper out of his bed, other people assemble – Orihime, Chad, Uryu and some guy named Ebern. Ebern? Who the heck is that? Ichigo realizes this new guy, who he believes to be an Arrancar, has come on account of him so he decides to handle him quickly. Except Ebern is not an Arrancar, not at all. And what he is is surprising.

Meanwhile a situation is developing in the Rukongai. Entire villages of people are disappearing.  Even as the Soul Reapers investigate, Captain General Yamamoto is visited by a contingent who have come to declare war! Even as he faces them down, Ebern taunts Ichigo to use his bankai and defeat him. However when Ichigo does as he wishes, Ebern seems frustrated that Ichigo’s bankai doesn’t disappear. What does that even mean? He departs in a huff, leaving a confused Ichigo.

Tragedy strikes the Soul Society with the death of one of their own, although the Captain General is safe. Yuki receives the news and relays it to Ichigo and the others. Suddenly, Ichigo spots something hurtling toward the earth and hastens to catch it, only to discover it is none other than Nel! Hueco Mundo has been attacked!  Naturally, Ichigo feels the need to help, as do Chad and Orihime, and even Kiskue. But Uryu has to sit this one out because he cannot conscience saving Hollows.

There is a new villain on the scene, and he has subordinates who seem to be as evil and crazy as he is!  They call themselves the Vandenreich, the Invisible  Empire… and the most surprising thing about them is that they are an army of Quincies! Now Soul Society and Hueco Mundo and the World of the Living are all in danger. These guys have a trick up their sleeves – they don’t just seal the Soul Reapers’ bankais – they can steal them! How does that even work? And why does Ichigo seem immune to that? Will Ichigo once again be the key to everyone’s survival?

I’m reminded of that old saying – be careful what you wish for. I wished for the end of the Fullbring arc and the arrival of the new arc. Well, it’s here, and I have a feeling we’re in for a bumpy ride!