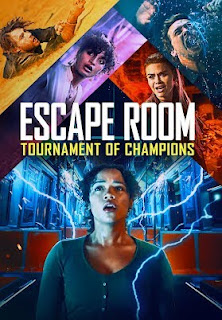 Zoey (Taylor Russell) and Ben (Logan Miller) barely made it out of the escape room alive. Ben is more than willing to just move on, but Zoey is determined to make the Minos Corporation pay for what they did. She wants to go to NYC to confront them but is still fearful of flying. So Ben reluctantly agrees to drive her there. But when they arrive, the place is deserted, no sign of anyone.

Feeling somewhat defeated, they get on the subway, and that’s when things begin to happen. They quickly discover that the other people on the train have been through their own brand of hell in the form of escape rooms, and it seems that now Minos has assembled a Tournament of Champions to play their next hellish game. 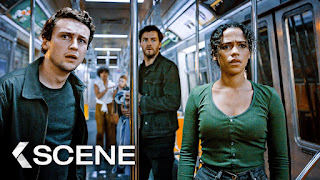 I can’t go into much of the plot as that would involve too many spoilers. The action begins on the subway as they have to figure out how to escape – naturally.  Besides Ben and Zoey, we pick up some players who are new to us – Nathan (Thomas Cocquerel), Rachel (Holland Roden), Theo (Carlito Olivero) and Brianna (Indya Moore). If you’ve ever seen Pose, you’ll recognize Indya from there, as she plays Angel (I do love that show!)

Of course the whole plot hinges around escaping each room which are each beset with deadly traps,

figuring out the puzzles and getting the heck out of Dodge. While I did enjoy this film, it isn’t quite as good as the first one, the puzzles not as complex, at least not in my opinion or that of the friend I watched it with. The twist wasn’t entirely satisfactory either, and on the whole I found myself left with many unanswered questions. But if I’m not mistaken, there will be a third film, as was made abundantly clear by the ending of this one.

Altogether, it was a fun watch, and I would recommend it. I’ll give it 4 Stars. 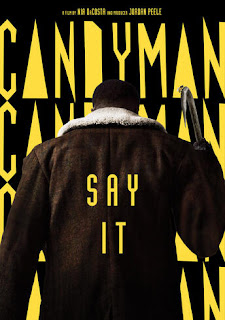 Up-and-coming artist Anthony McCoy (Yahya Abdul-Mateen II) is concerned that critics believe his career is the result of his relationship with his agent/girlfriend Brianna Cartwright (Teyonah Parris). They live together in a gentrified area that was once the projects known as Cabrini Green. Anthony learns an urban legend that took place there back in the day – the legend of Candyman – and becomes obsessed with the tale.

Legend says that if you say Candyman’s name five times while looking in the mirror, he will appear. The more Anthony learns about the legend, the darker his art becomes. But what is even scarier is that people are dying in the same manner as Candyman was said to kill. Is art imitating life or what? Anthony is in for a bumpy ride and some difficult truths. Can he handle the truth? And what exactly is it? 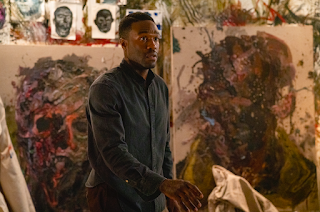 This is a sequel to the 1992 film starring Tony Todd and Virginia Madsen.  Vanessa Williams briefly reprises her role as Anne-Marie McCoy, Anthony’s mother. I was excited to see this film and looked forward to it greatly, especially since Jordan Peele was involved with it. However I have to say I was disappointed with the outcome. What was originally a horror story has morphed into some kind of political statement having to do with the erroneous deaths of black men at the hands of white men in a position of authority (I read that theory, I didn’t originate it, but I can see where someone could get that out of it).

Anthony’s reveal comes late in the film (although I already knew it, having read about it before the film

ever came out). The pacing of the film is a bit slow, taking forever to get to the point regarding Anthony and the Candyman. But most disappointing of all is the almost non-existent presence of Tony Todd. Seriously? The premise was so completely changed that he was almost not in it, and he makes the first film. They squandered their greatest asset, and for what? I don’t really know, to be honest.

Abdul-Mateen wasn’t bad as Anthony, but I felt his performance was slightly lacking. I would have loved to see  him and Todd interact, but alas that didn’t happen. As a horror film, I found it unsatisfactory and rather disappointing. I wanted my Candyman and I didn’t get him. I’ll give this film a shaky 2.5 Stars.