Kate (Franka Potente) goes to a party with some friends, but it isn’t quite what she hoped for. A guy she works with, Guy (Jeremy Sheffield) doesn’t know how to take no an answer, making himself quite obnoxious. But Kate has better places to be. Her friend knows where George Clooney is partying that night and has two tickets for them to get in. But her friend leaves without her, so the disappointed Kate heads to the subway, hoping to find her. Having had a bit to drink, she falls asleep and only wakes after the last train has gone.

The station is eerily silent with no one else there. To Kate’s dismay, when she heads up, she finds the gates locked and no one around. When after a while a train unexpectedly shows up, she gets on with great relief, only to find Guy there. And he still won’t take no for an answer.  But as he tries to assault Kate, something grabs him and pulls him off the train. Suddenly Kate becomes painfully away there is someone or something else down there. Something deadly.

Kate has to navigate the subway tunnels, searching for a way out. Her life depends on it.

This isn’t a half-bad horror movie. It has a creepy premise, and who wouldn’t commiserate with Kate, 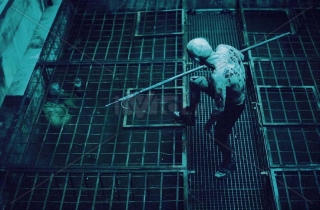 who is having a bad night and just wants to get home? That is the secret of horror films. You care what happens to the main character and live vicariously through them, which also means you become scared for them as well, which heightens the thrill of the movie.

When Kate runs into George, the new subway employee, she feels a sense of relief at seeing another human being in the same predicament as her, sure that by working together, they can flee this place.  There are a number of jump scares, not unexpected. And the atmosphere is sufficiently icky/creepy to convince me not to go into a subway, ever. But what does bother me is the answer to the riddle, the explanation for the place Kate found, and for the guy who obviously lives in the tunnels and probably has his whole life. One can extrapolate based on what is shown, but that really isn’t quite enough. And so you are left with a great big WHY at the end of the day. I am giving this 3 Stars. 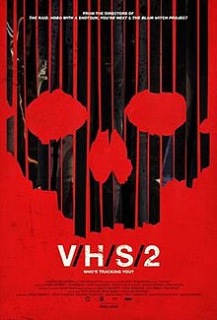 A private investigator and his girlfriend/assistant are given an assignment to find a missing student by the student’s mother. She gives them permission to go into his house in order to look around. The PI breaks in, but can see nothing, other than a video set-up and some VHS tapes. He has his gf watch the tapes while he searches for clues in the rest of the house.

What she finds is a series of found footage videos, with different stories. One of the films is about a man who lost his eye in an accident and is given an experimental prosthetic eye with a camera. The only downside is that the camera sees all, and he’ll have virtually no privacy. After coming home from the doctor’s office, he begins to see strange things. People who look like they are dead. Naturally he starts to freak out. And then he receives a visitor – a girl who was also in the office. She says she needs to talk to him and he will want to hear what she has to say. Apparently she had a cochlear implant, and now she can hear the dead people he can see.

A young man has a video channel and is going to make a video of his bike ride. But inside the woods, he almost runs into a woman who is covered with blood, screaming that he has to help her boyfriend. Panicked, he tries to help. But what he sees in the woods is a lot worse than an injured man, and when he returns to the woman, it seems she has met the same fate. Things just go downhill from there.

Young documentary makers want to film an interview with a cult leader in Indonesia. He reluctantly

allows them to visit the cult in their compound. But from the beginning, something seems off, maybe even unnatural. They all refer to the Leader as the Father, and he talks about taking them to their safe haven. Shades of Jim Jones! Or is it something worse?

Two brothers and a sister are left home alone for the weekend while Mom and Dad are away. The boys decide to prank the sister and her boyfriend when he shows them and interrupts them in the bedroom. They vow revenge. But what starts out as a simple prank becomes far worse when aliens decide to attack on that night, and they want to take the boys with them.

This film is similar to the one before in that it involves found footage on a video tape. But the stories are different, and each is told rather well. And there is more than a sufficient creep factor for horror buffs. The couple who are the investigators are the framework the film is built on, their story framing the whole. The one about the implant could be a glimpse of the future. The alien story might be a little over the top, but feasible if you believe in aliens. The cult story is very damn creepy, because I’m sure there are people out there just that fanatical about their cult leader. Definitely worth watching. I give it 4 Stars. 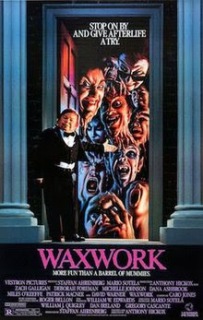 A new waxwork museum has just opened up in the middle of a well-to-do residential neighborhood, and some of the teens are curious. A couple of teenage girls receive an invitation from the proprietor (David Warner) to come for a private party at midnight, and they can bring some of their friends. But no more than six people, please.

Mark (Zach Galligan) likes China (Michelle Johnson), but she is rather flirtatious, to put it mildly. He agrees to go to the waxwork to be with her. The group assembles outside the door on time, but a couple of the kids chicken out, to the disappointment of the diminutive man who answers their knock. The group begins their tour of the wax exhibits, and are surprised at how lifelike they appear. 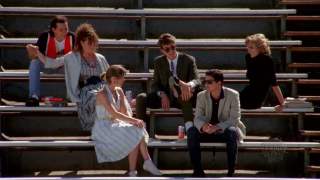 Some of the exhibits include Count Dracula, Jack the Ripper, the Mummy, the Marquis de Sade, as well as others. But something strange begins to happen. One by one, the teens find themselves inside the different exhibits. More than that, they are part of the exhibit. And suddenly they find they are fighting for their lives in order not to become permanent parts of the exhibits.

I wasn’t sure what to expect with this comedy horror movie, but I became really interested. Okay, the characters are a little stereotypical teens, but that works in this context. It’s watching what happens when each gets pulled into a different exhibit that makes it interesting. The girl’s reaction to the Marquis de Sade (J. Kenneth Campbell) is not what you would expect, neither is the girl who winds up with Count Dracula (Miles O’Keefe). David Warner is handsome as ever, and look for John Rhys Davies as a werewolf, and Patrick MacNee as Sir Wilfred.  A fun romp, although maybe it could have been tightened just a bit. There are a few moments that last too long. I give this a solid 3.5 Stars.