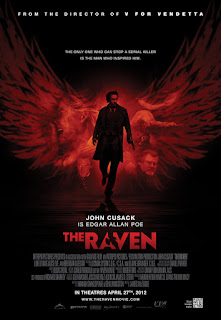 Baltimore is being plagued by a series of strange murders which have left the police baffled. The latest involves a mother and daughter found dead in a locked room with no exit. Detective Fields (Luke Evans) thinks the scenario sounds author. Author Edgar Allan Poe (John Cusack) has a reputation more for being an alcoholic than a writer, and he’s worn out his welcome in more than a few places. His girlfriend, Emily Hamilton (Alice Eve) has a disgruntled father on the police force (Brendan Gleeson), who has no use for the writer and threatens him if he should come near his daughter again.

Recognizing that the murders have been inspired by the works of Poe, Fields approaches him and enlists Poe’s reluctant aid in solving the murders. The serial killer is obviously enamored of Poe’s fiction, and has imitated such stories as Murders in the Rue Morgue. Emily’s father is giving a ball, to which Poe has pointedly not been invited, although they have secretly planned to announce their engagement that night. Fields warns the captain to cancel the ball, but to no avail. Realizing that this is just like The Masque of the Red Death, Poe sneaks inside to await the killer. But when the man dressed as Death rides into the company, it turns out he is just a diversion for the real crime – the kidnapping of Emily. Things just got real.

Hamilton reluctantly accepts Poe’s help as they race against time to rescue Emily. But the killer is adept at spreading false clues. Poe is afraid if they don’t find her, she will die. He would rather give up  his life in exchange for hers. Will that become necessary.

This is a pretty good cast, especially John Cusack as the alcoholic writer. At the beginning of the film, 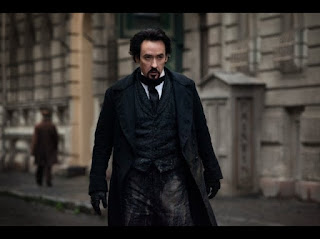 the question is posed regarding the last few days of Poe’s life, before he is found on a park bench. I don’t believe this movie answers that question, at least not in my mind. As I said, good cast. I liked Luke Evans in The Alienist, and the young policeman, John Cantrell, is played by Oliver Jackson-Cohen, whom I liked in The Haunting of Hill House and The Haunting of Bly Manor. The newspaper editor is played by Kevin McNally, who played in the Pirates of the Caribbean movie as Gibbs. The story is an interesting one. Direction seemed good. And yet I thought it didn’t quite hit the mark for me. The only real passion seen is that of Poe himself, and Detective Fields.  No build-up of tension, no real excitement. The revelation of the killer is almost an anti-climax. I’m not sure if that’s a matter of editing or not, maybe better pacing? Or is it the writing itself? It was fun to see how much of Poe’s work would be referenced. I think, on the whole, the story needed to be edgier. As I listened to the music in the ending credits, I couldn’t help but think the movie could have matched that in edginess and would have had a better feel.  More depth. It was, as I said interesting, but it could have been more. I’ll give it 3.5 Stars. 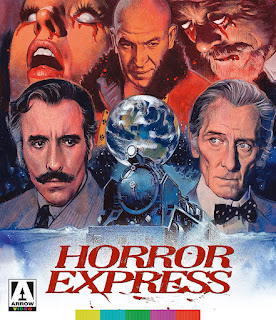 While on an expedition in China, British anthropologist Professor Saxton (Christopher Lee) discovers an interesting specimen, a half human creature that may be millions of years old. While waiting to transport it aboard the Trans-Siberian Express, he runs into rival anthropologist Dr. Wells (Peter Cushing). They are obviously not the best of friends, and Saxton works to conceal his find from Wells. At the station, two men turn up dead, their eyes turned white. But no one has a clue as to what has happened.

Room on the train is scarce, as Saxton and Wells discover when they end up as roommates. Also on the train are Countess Irina Petrovska (Silvia Tortosa), her husband Maryan (George Rigaud) and a monk, Father Pujardov (Albert de Mendoza) who besides being rather religious seems very devoted to the Countess and resembles the mad monk Grigori Rasputin. Wells is traveling with his assistant, Miss Jones (Alice Reinhart), as well as a Russian beauty (Helga Liné). The Count and Countess are not what they appear to be, and seem intent on seducing Dr. Wells. Wells is more interested in what Saxton has brought with them, and bribes the baggage man to take a peek when no one is around. That does not turn out well for him. 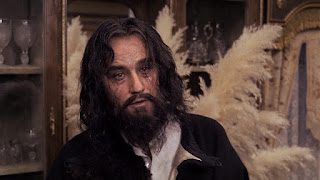 The dead all have the same strange white eyes. The two professors perform an autopsy on the baggage 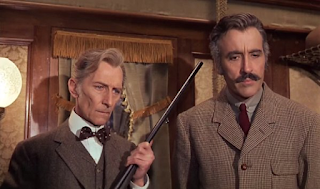 man and discover that his brain is smooth, unlike a normal brain, which has a wrinkled surface. Also, the creature Saxton has discovered and brought onto the train has disappeared! Is there a link between the murders and this thing, whatever it might be?

This film was made in 1972 and reminded me of a Spanish Hammer film. Yes, there are some things about it that are a bit hokey, such as the special effects. But there are also some things I’ve never seen in a horror film, such as the prehistoric vampire who doesn’t drink blood but sucks people’s thoughts via his glowing red eyes. 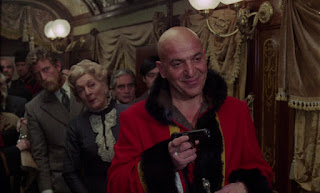 Also, there is Cushing and Lee. They are worth watching at any time, two great horror actors that I love! Although rivals, they are forced to work together to solve these murders. Then you have an unexpected appearance by Telly Savalas as a Russian cossack policeman who is more than a little flambuoyant.  Prehistoric vampire, Trans-Siberian railroad, zombies, and Telly Savalas, along with Cushing and Lee – a recipe for fun. I enjoyed this film and will give it a solid 3.5 Stars.