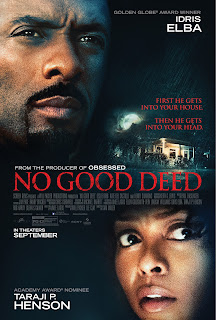 Colin (Idris Elba) is a convicted criminal who is serving a lesser sentence than he should have received due to circumstances. Up for parole after only five years, he is turned down because the decision has to be unanimous and one member of the parole board is determined he stay behind bars. On the way back from the parole hearing, Colin catches a lucky break and manages to escape. After visiting his ex-fiancé and dealing with her, he steals her car and drives away. But luck deserts him as he flees in the midst of a storm and is unexpectedly run off the road, crashing the car.

Terry (Taraji P Henson) has her hands full with a young daughter and an infant son. Her husband Jeffrey (Hemry Simmons) is a busy man, but he has promised her he’ll come home early so she can get some things done. Only it turns out he has no time because he’s heading out to take his father on a golf holiday for his birthday. Terry is unhappy, but what can she do, so she battens down for the approaching storm. An unexpected knock at her door turns out to be a man in distress, who wants to call a tow for his vehicle. Reluctant, she allows him to use her phone outside and doesn’t admit him into her house. But after finding out it might be a while for the tow truck to arrive, she admits him, against her better judgement. 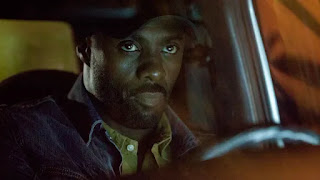 Her guest, whose name is Colin, turns out to be charming, and Terry begins to relax. Her friend Meg

(Leslie Bibb) soon arrives for what was to be a girls night, but she doesn’t mind the stranger in their midst and offers him wine as well. She flirts with him outrageously. But when she gets him alone in the garage, where he has gone to smoke, and he tries to convince her that he and Terry have been having an affair that Meg is unaware of, the shit hits the fan, and the situation goes from uneasy to dangerous…

I really enjoyed this movie.  I am a huge fan of Idris Elba, and much as I like him, I wasn’t exactly rooting for him here lol He is quite charming… until he isn’t. While Terry starts out as somewhat weak, or tired, and maybe too nice for her own good, by the end of the movie, there is quite the change and I was rooting for her all the way. I’ve liked her ever since Person of Interest and was glad to see her again. Nothing is cut and dried, and while you may assume how the ending will go, it’s the journey to get there that will hold you spellbound. I give this film 4.5 Stars