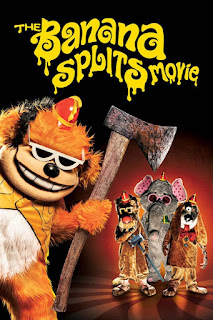 Harley (Finlay Wojtak-Hissong) loves the Banana Splits more than anything. So when his mother presents him with tickets to attend a live taping of the show as a birthday present, he is over the moon happy. He requests a classmate go with him. Zoe (Maria Nash) wouldn’t call herself a friend of Harley’s, thinks he is weird, but her mother says she has to go, so she has no choice. Harley’s mother goes also, as well as Harley’s father Mitch (Steve Lund) and his half-brother Austin (Romeo Carere). Also in the audience are a couple of would-be influencers, and a stage father who is intent on getting his daughter into show business via the Banana Splits. At the show, it’s announced that people with special tickets will be allowed private time with the Splits after the taping. Harley’s family don’t have the right tickets. But after Austin starts flirting with one of the members of the staff, Paige (Naledi Majola), she adds them to the list.

But all is not as it appears to be. For one thing, the new network exec, Andy (Daniel Fox) has decided to cancel the show, making this the last episode. But that only triggers a reprisal on the part of his cast, who are all animatronics, other than sidekick Stevie (Richard White), who spends most of his time being drunk. The Banana Splits have their own agenda, and it isn’t gonna be pretty. 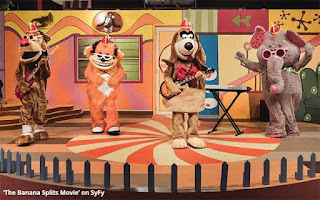 I was skeptical when I saw the trailer for this film, wondering how a preview for a kids movie got onto a horror movie disk. But this is not kid’s movie, make no mistake about that. It’s a virtual gore fest. However, saying that, unless you just want to watch some assholes get what’s coming to them (and some innocents who don’t deserve it), there is little to commend this film. I am really surprised that Hanna Barbara allowed them to make this film, but they probably figured it was their last chance to make money off the franchise. Watch it for the blood and gore, watch it for the revenge, but don’t go looking for a good movie. I’ll give it 1.5 Stars.