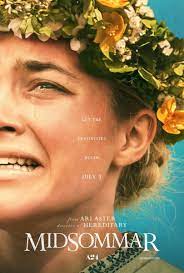 Following the tragic death of her family, Dani (Florence Pugh) has been clinging to her boyfriend Christian (Jack Reynor) a bit more than usual, to the annoyance of his fellow students/friends. They’d been planning a trip to Sweden by one of the group to witness a mid-summer festival in his hometown. Christian feels compelled to tell them that he’s invited Dani, but she doesn’t really want to go. However, she does, so they grudgingly accept her presence among them.

There is something very beautiful and at the same time odd about the village where they end up. The people are indeed welcoming and loving. At the same time, some of their ways are… unusual, to say the least. One of the reasons Josh (William Jackson Harper) is there is to write about the festival for his thesis. When Christian suddenly decides to use that specific festival for his thesis is well, tensions begin to run high. 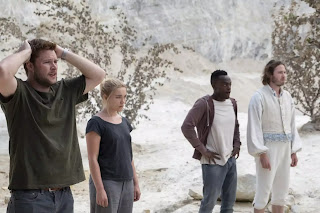 Still reeling from the death of her family, Dani is none too pleased when one of the village maidens 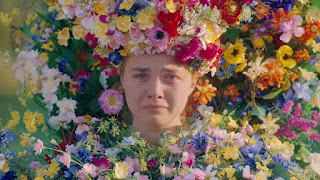 seems to have set her cap for Christian. Another couple, Simon (Archie Madekwe) and Connie (Ellora Torchia) are there also, and Simon unwittingly does something completely unforgivable to the villagers. He inexplicably decides to leave without informing Connie, who is understandably distraught. The villagers assure here that the man who took Simon to the station will be back for her as well but she doesn’t wait and runs off.

Things get stranger and stranger… and then somewhat sinister…

This movie was beautiful to behold, set in a beautiful country. Everything looks wholesome and clean, but of course what you see isn’t always what you get. It all depends on how you look at it, as simply a horror story (from most people’s viewpoint) or a lovely fairy tale (from Dani’s POV). Although it’s about two and a half hours long, it doesn’t really feel long as you keep wondering what is going on and what’s going to happen. Pay close attention for clues, even though they won’t really prepare you for the ending. But there are hints. Might have to watch it again sometime to find more. I’ll give this film 4 Stars.