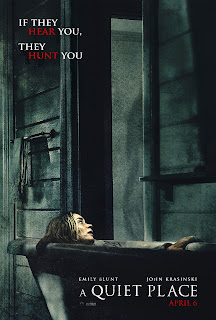 Monsters have invaded our world, terrifying blind creatures with preternatural hearing. At all costs, don’t let them hear you or your life is forfeit. Survival is the name of the game for the Abbott family. Lee (John Krasinski), his wife Evelyn (Emily Blunt) and their three children. They are always on the move, staying ahead of the creatures, keeping silent in order to not be heard. But little children sometimes do stupid things, and the Abbotts’ youngest is taken from them. Daughter Regan (Millicent Simmonds) feels guilty for what has happened, and feels that her father blames her too, and doesn’t love her as much as her brother Marcus (Noah Jupe).

The Abbotts have a farm where they have set up a system of lights that warn of danger if the lights are red. Lee works with electronics and sound and has devised ear plugs that two people can use to share music. He takes his terrified son out one day and explains to him that if there is a louder noise, that noise will attract their attention every time. Evelyn becomes pregnant, which brings its own problems with it, such as a crying baby, but they have provided for that with a special place for the newborn. However, when plans go awry, the whole family finds itself in danger. 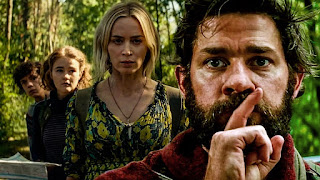 This film demands you give it a certain amount of attention because so much of it is visual as the people dare not speak. It’s a post-apocalyptic world, although I’m not really sure how the creatures got there. But they’re there, and the world is in serious danger. It’s bleak and somewhat horrifying. I can’t imagine having to deal with this kind of life. I know if I can’t listen to my music at the office, the silence drives me nuts. They can’t talk to one another, play music, and they always have to worry about making any sound. John Krasinski is also the director of this film, and I think he did a good job. I’m looking forward to the second one. I’ll give this film 4 Stars 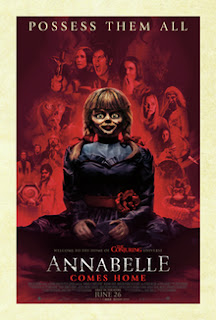 Ed (Patrick Wilson) and Lorraine (Vera Farmiga) Warren are going on a business trip so they engage local teenager Mary Ellen (Madison Iseman). Mary Ellen’s classmate Daniela (Katie Sarife) learns of her job with the Warrens and invites herself over to the house. She befriends Judy Warren (McKenna Grace), who doesn’t have many friends. Daniela is excited to be in the Warrens’ home and asks a lot of questions, especially about where the haunted items they collect are. She is told they are downstairs, but the door is locked and no one is allowed down there.

Daniela persists and finds an opportunity to stay at the house while Mary Ellen and Judy are gone. She immediately begins snooping, and manages to find the key, letting herself into the forbidden area. She is fascinated by what she sees, especially the creepy looking doll in the glass case which has a sign warning not to open it ever. But as she’s looking around, the doll seems to move, and curiosity gets the better of the girl, and she opens the case. 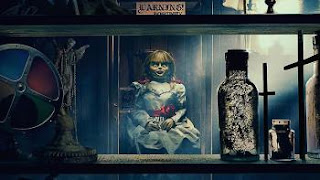 This isn’t the worst film of the Conjuring series, but it isn’t exactly good either. Somewhat predictable, it 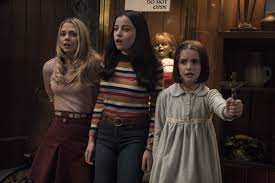 utilizes cheap jump scares. We do find out why Daniela is obsessed with the Warrens, as she wants to contact her late father, who died in a car accident while she was driving. I think the film suffered from the lack of the Warrens, but then it would never have happened either because they would not have allowed access. If you are just into watching the series, go ahead. Otherwise, not worth it. I’ll give it 3 Stars, mostly because I like Patrick Wilson.