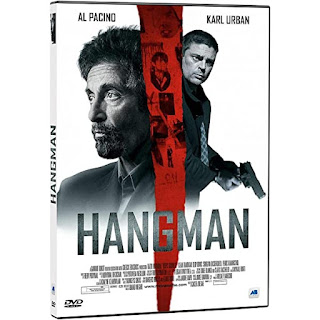 Will Ruiney (Karl Urban) is a homicide detective who finds himself on the trail of a serial killer who is playing a sadistic game of Hangman with his victims. He calls his own partner Ray Archer (Al Pacino) out of retirement to assist in the case. Nosy reporter Christi Davies (Brittany Snow) inserts herself into the case and insists on following the detectives around, despite the potential danger to herself. Each victim is found hanging, with a letter carved onto them.

I’m not gonna beat around this bush – this is not a good movie. In fact, it’s fairly awful. The only saving grace is that it’s short. And I’m saying this despite the fact that I do like both Pacino and Urban. But even they couldn’t save this disastrous formulaic boring film. Urban basically phones in his part, Pacino is just playing Pacino and he seems to be amusing himself as much as anything. And Brittany Snow isn’t much of an actress, at least not in this. 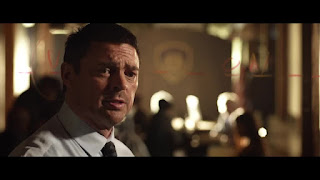 The writing is awful, the plot boring. I read someone’s description of it as imitating the film Seven (which was good, btw). I almost turned it off, I was so bored. The killer doesn’t appear until the end, and he isn’t very good either. I’m just going to give this 1 Star because I do like Pacino and Urban, but I recommend you not watch this horrible movie. 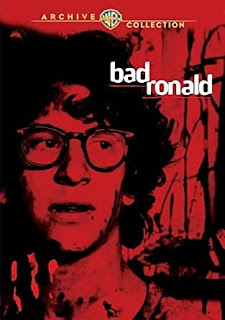 Ronald Wilby (Scott Jacoby) is a rather shy, introverted young man who lacks some of the social graces. It doesn’t help that his peers have a tendency to tease him mercilessly and relentlessly. Ronald lives with his ailing mother Elaine Wilby (Kim Hunter) in an old Victorian mansion. One day, Ronald cracks and accidentally kills a young girl. He confesses to his mother, not knowing what to do. Together they devise a plan whereby they make the downstairs bathroom into hiding place, remove the door and replace it with drywall so no one will know it is there and Ronald can live there until it’s safe for him to surface again. He does the work himself and adds a small opening in the walk-in pantry where his mother can give him his food.

But things go wrong after his mother goes into the hospital for routine surgery…and dies. The house is sold to a couple with three daughters – the Woods (Dabney Coleman and Pippa Scott). In his hideaway, Ronald continues his hobby of drawing and painting the fantasy world he has created, with himself as the hero. He spies the Woods and becomes immediately drawn to one of the daughters, Babs (Cindy Fisher). He spies on her and her family through holes he has drilled himself, and fantasizes about Babs. Sometimes he takes a chance and goes into the house when no one is home. But the nosy neighbor Mrs Schumacher (Linda Watkins) spots him one day, and things are about to go downhill 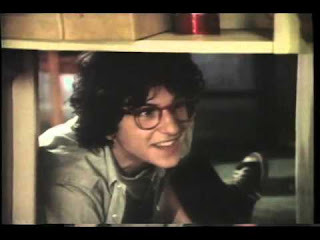 This film is from 1974, a time when films didn’t show as much violence as many do now. This film is 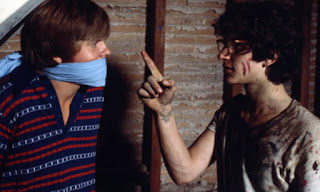 no exception, but still manages to convey a very creepy vibe. Imagine someone living behind the wall in your house? And not just anyone but a murderer. Spooky, right? Scott Jacoby gives a chilling performance as Ronald, the titular character, just the right combination of naivete, nerdiness, and downright creepiness. This is an early role for Dabney Coleman, and for once he isn’t the creepiest in the room lol

I really enjoyed this film, but it is really short, about an hour and a quarter. I think it’s well worth the watch, and thanks to my friend Vinny, who recommended I watch this. I give this film 4 Stars.