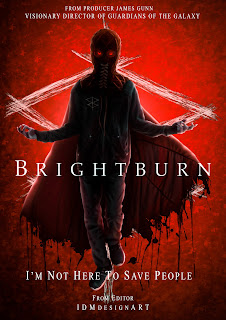 Tori and Kyle Breyer (Elizabeth Banks and David Denman) have struggled to conceived. They want a child more than anything. So when, out of the blue, some kind of alien spaceship crash lands in their backyard, its sole occupant a baby boy, their dreams seem to have come true. Or is it their nightmares?

The couple tell their friends and family that they have adopted, and they name the child Brandon (Jackson A. Dunn) and raise him with much love on their farm located just outside the small town of Brightburn, Kansas. Kyle insists that Brandon stay out of the barn, because it’s dangerous and not a place to play. But the truth is that the spaceship he arrived in is locked up beneath the barn. 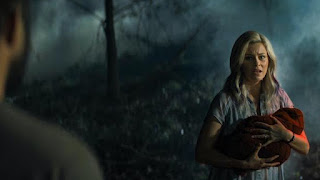 Everything seems fine until about the time that Brandon reaches puberty. He seems drawn to the barn, and to whatever is hidden there, although he is discouraged from going there. When his dad gives him a little talk about puberty and some of his feelings, he misunderstands his words as having permission to do what he wants, and proceeds to terrorize a girl in his class that he finds attractive. He only succeeds in frightening her and the results during a class trust exercise are horrific. 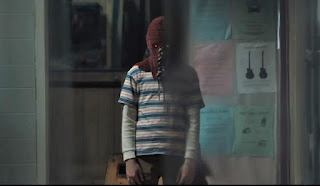 Brandon is hearing voices from the spaceship, and he comes to understand that he is special… but not in a good way. His hidden drawings reveal his true nature, as well as his plans to take the world. The adults in his life begin to understand there is something terribly wrong with the boy, but it’s too little too late as one by one they fall victim to his unusual powers…

This film was brought to us by the same guy who gave us Guardians of the Galaxy. But this superhero is not here for good. This is no Superman. This alien wants to rule the world. Creepy and effective, perhaps the message here is not to automatically believe that aliens from outer space are our friends and to be cautious at all times. I’ll give this film 4 Stars. 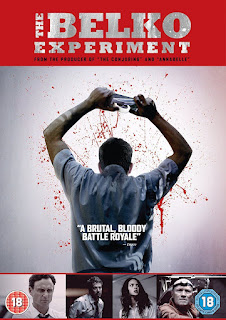 It’s just another day at the office for the employees of the Belko Corporation as they arrive for work in their isolated high-rise corporate office building in Bogota, Columbia. But things seem a little off. There aren’t as many of their co-workers as usual. And who are the strange security guards on the grounds, and what are they doing in that unused hangar? Perhaps things are not what they seem. A mysterious voice over the loudspeaker system announces that there are eighty employees in the building. They have two hours to reduce that number by thirty, and if they do not, then sixty employees will die. And to show they mean business, they kill a few for good measure.

The employees listen in stunned disbelief. Their first thought is to flee, but to their dismay the building has been shut off and escape is not possible. The head of the company, Barry Norris (Tony Goldwyn) is quick to decide they have to do as they are told and kill off thirty employees rather than lost sixty. His obnoxious crony Wendell Dukes (John C McGinley) aka the office pervert is quick to agree.  Mike Mitch (John Gallagher Jr) is one of those who disagree and say there must be a way. But it quickly becomes clear that some people think only of themselves and have no problem in committing murder. 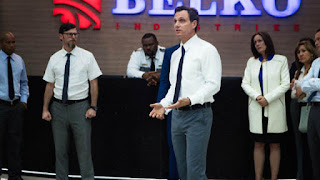 And is there any guarantee that if they obey the rules, they will be allowed to live?

This film is about a horrendous social experiment involving human interactions under pressure while on the job. But this experiment comes with a high price, and these deaths are forever. Very interesting concept. Not surprising that the men at the top only think of themselves first but decide who will live and who will die. When the security guard refuses to give them the keys to the weapons area, they find a way around that and arm their most trusted people. You’ll see some familiar faces, including Owain Yeoman, who played Benedict Arnold in Turn, Abraham Benrubi, who played Jerry on ER, and Michael Rooker of Guardians of the Galaxy and The Walking Death. John C McGinley plays an asshole well, and this is no exception. This time he’s a perverted asshole. 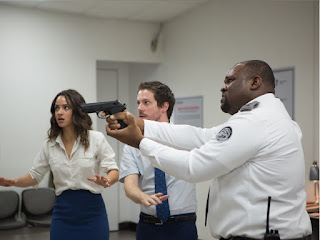 The ending implies that the story doesn’t end there, but I see no evidence there will be a sequel. The action is fast-paced and horrifying, as co-workers are pitted against one another in a deadly game. I have to admit some of the deaths were satisfying. I give this film 4 Stars.