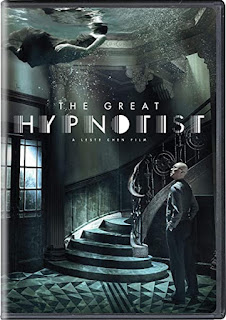 Xu Ruining (Zheng Xu) is a successful psychologist who specializes in hypnotherapy. His former teacher, Professor Fang (Zhong Lü) refers a rather troublesome patient to him, Ren Xiaoyan (Karen Mok). Red has been to other therapists, but no one believes her when she says she can see dead people. Dr Xu doesn’t especially seem to believe her either, but he’s determined to get to the bottom of her problems, which involve having been abandoned as a child and left in an orphanage, even as he tells her that no one leaves his office without having been cured.

Sounds like a challenge, but which one will come out on top?

This is a beautifully filmed, well-acted and well-written thriller about two protagonists who are both strong-willed and determined. The plot and the characters suck you in until you don’t know which side to believe. Does Ren really see dead people? Can Dr Xu bring her back to reality? It seems as though the more he tries, the more he is sucked into her reality. Is it reality or is it something else? 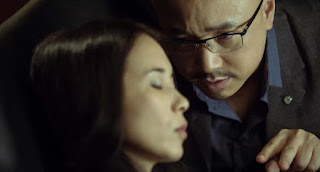 You may remember Zheng Xu (Dr Wu) from another film I recently reviewed, Lost in Hong Kong. This 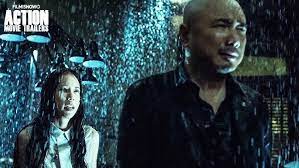 role is like night and day from that other one, showing the actor’s versatility. I’ll have to look for more of his films.  I enjoyed watching this film and will give it 4 solid Stars.

Everything Everywhere All at Once 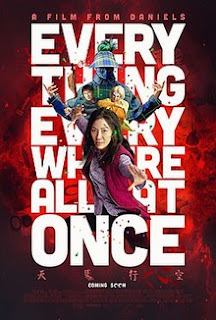 Evelyn Wang’s (Michelle Yeoh) life is not quite the way she once pictured it. She and her husband, Waymond (Ke Huy Quan) own a failing laundromat. Her daughter Joy (Stephanie Hsu) is at odds with her, and Evelyn can’t bring herself to tell her aging father, Gong Gong (James Hong) who lives with them, that Joy has a girlfriend. The business is being audited by the IRS. Evelyn, Waymond and Gong Gong go to the office to meet with agent Deirdre Beaubeirdre (Jamie Lee Curtis). And that’s when everything begins… to change?

Evelyn finds her attention is wandering from Deirdre and her incessant complaints, when she finds herself looking at a strange note telling her to do strange things, such as put her shoes on the wrong feet and think herself inside the janitor’s closet. When she does, she finds herself with a man who looks like her husband but who says he is from another universe, and it is up to her to save the world… 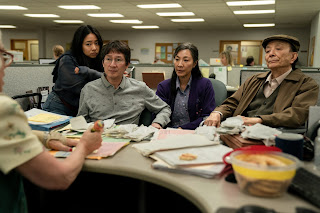 To say this movie is a wild ride would be an understatement, and on the surface it seems chaotic and 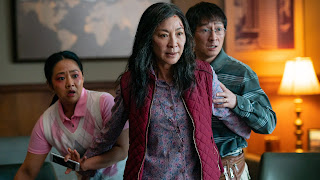 erratic as Evelyn tries to make sense out of everything, but in so doing she learns to come to terms with her own life and the people in it. Great cast and imaginative writing make this sci-fi thriller is sure to become a cult classic. It requires multiple viewings, I think, and I’m sorry I didn’t get a chance to see it in the theater. I hear it was mind-blowing. I give this film 4.5 Stars.