Eun-yi Li (Jeon Do-yeon) is dissatisfied with her life and her job in a restaurant and longs for more. After witnessing an unknown woman jump to her death, Eun-yi is approached by an older woman, Byung-sik (Youn Yuh-jung) with an offer of employment in a wealthy household. She is to be nanny to the couple’s young daughter Nami. The wife, Hae-ra (Woo Seo) is also pregnant with twins and close to giving birth. Her husband Hoon Goh (Lee Jung-Jae) is a handsome and successful businessman who is away when Eun-yi arrives.

Eun-yi settles into her new chores. She quickly becomes fond of Nami, and feels well treated by Hae-raa and Byung-sik. When the husband does arrive, though, complications begin. He comes to her room in the middle of the night, armed with wine, and she admits him to her bed, beginning a torrid affair.  Not surprisingly, she becomes pregnant and keeps it a secret, but her secret is soon revealed to Hae-ra and her mother (Ji-Young Park), as well as Byung-sik. Enraged by her husband’s betrayal, the wife vows vengeance while the housemaid is determined to have her baby. 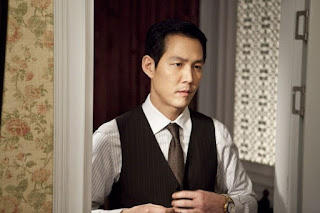 This version of the Housemaid is not to be confused with the 2021 film, which looks like a Spanish remake, but it is a remake of the 1960 film. I haven’t seen that one, but I intend to. There is also a 2016 film called The Housemaid which is completely unrelated and takes place in 1953 French Indochina, which I have seen.

The Housemaid is psychological but also a look at the classes, the rich and the poor. Hoon is a selfish man who thinks only of his own pleasure when he turns to the housemaid as his wife, who is expecting twins and is pretty large at this point, isn’t meeting his needs as a man. He never takes Eun-yi’s feelings into consideration, as though she has none. The wife and her mother are every bit as callous, maybe worse, with some of the things that they do. 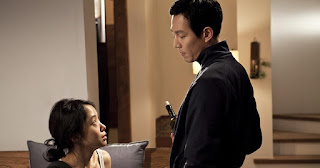 I have to confess that a large part of my interest in this film lies with Lee Jung-Jae, who is very sexy if somewhat entitled. He is a very versatile actor and very sexy. The film is well done and is visually very stunning. I give this film a solid 4 Stars.

Hobo With a Shotgun 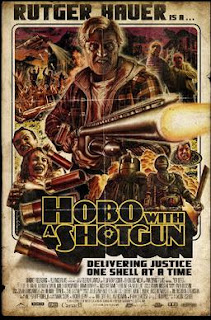 A hobo (Rutger Hauer) who is riding the rails gets off at a town that proves to be less than an ideal place to live. The town is under the tyrannical rule of a madman named Drake (Brian Downey), and his two good-for-nothing vicious sons, Slick (Gregory Smith) and Ivan (Nick Bateman). Cruelty and pain are the order of the day, to be inflicted in any and every way possible. Hobo stays to himself, even though he doesn’t like what he sees. Spotting a lawn mower for sale in the pawn shop window, he dreams of owning it, of starting his own business and making his own way. But the $49.95 asking price is beyond his means.

If Abby (Molly Dunsworth) ever had dreams of doing something with her life, she has discarded them

and given up to selling herself on the streets. She does what she has to do to survive, and she is treated terribly as a result. When Hobo stands up for her and gets hurt, she takes him home and cares for him. He believes in her, thinks of her as a teacher, and wants better for her.

While Hobo is in the pawn shop, admiring the lawn mower he can’t afford, two bullies enter and begin to terrorize the customers and the shop owner. Reaching his breaking point, Hobo reaches for a shotgun hanging on the wall and begins to enact his own form of revenge. 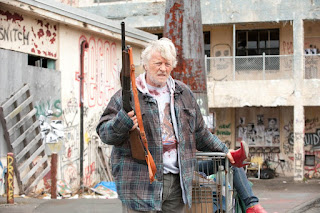 Be warned that this dystopian story is filled with assorted acts of cruelty and a great deal of violence and callous indifference. You gotta love Rutger Hauer as the Hobo, standing up for people that no one else will stand up for, including themselves. I love a good underdog movie. The main villain Drake is appropriately sleazy and disgusting. It’s hard not to root for his demise, as well as both of his demon spawn.  I give this film 3.5 Stars.