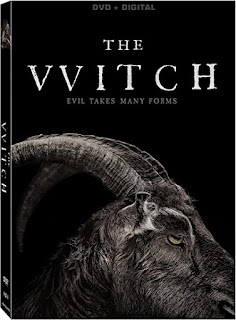 William and Katherine and their four children are forced into the wilderness in 1630s New England, ousted by the village where they lived. They find a piece of land they like and start fresh. Months later, having added a new mouth to the family, they are struggling and life is hard. Thomasin (Anya Taylor-Joy) is the oldest, and helps as much as she can. The twins, Mercy (Ellie Grainger) and Jonas (Lucas Dawson) are the worst and make her life miserable. Caleb (Harvey Scrimshaw) is the next oldest, but he seems to spend a lot of time becoming aware of his sister’s body.  There is even talk about sending Thomasin away, to keep from having to feed her. Especially after, while she is watching baby Samuel, he mysteriously disappears.

Caleb, not wanting to lose his sister, decides to steal away in the middle of the night to find food but Thomasin catches him and insists on going with him. They encounter the strange rabbit he and his father  had run across before while hunting. Thomasin’s horse spooks and she is thrown. By the time she comes to, Caleb is nowhere to be seen. By then, the parents are calling frantically for their children. William finds Thomasin but there is no sign of Caleb. Unknown to them, he found a small house in the woods, with a strange lady. 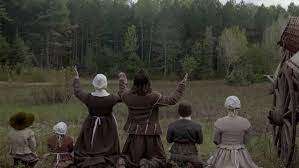 The situation goes from bad to worse with accusations of witchcraft being tossed out by the evil twins. The mother is losing it, and the father is frantic. What more can happen to one family?

This was a dark film, for sure. Descent into madness or something worse? I’ll confess, I had to look up the explanation, despite having just watched it. It was well done for the most part. However, the end went off the rail, in my book. For that reason, I’m giving it 3.5 Stars. 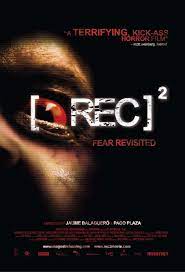 There is a situation going on in an apartment building in Barcelona. Police have been called to the building, as well as fire fighters, along with a TV news crew. All are still inside, and unable to leave due to the building having been quarantined. A medical officer and a group of soldiers are sent inside to assess the current situation… but unknown to the others, someone has his own actual agenda.

The soldiers are instructed by the medical officer to film everything, much the same directives given by Angela, the news reporter, when she first entered. A man tries to follow them inside, claiming he has medicine for his wife and daughter, but they refuse to listen to him or admit him. Inside all is eerily quiet. The soldiers are unsure what is going on, but the medical officer Dr Owen (Jonathan Mellor) seems to know what he is looking for, and he is determined to find it. 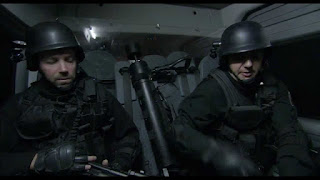 Rec 2 picks up right after the events of the first Rec, now in POV of the soldiers.  At first, all is quiet, 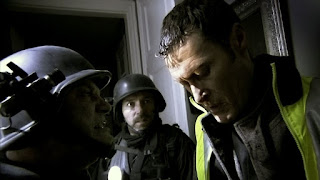 but that quickly changes as creatures begin to appear, leading to casualties on both sides. The soldiers are unable to simply leave, because the medical officer (who isn’t what he appears to be), has the only means of egress, one which involves voice recognition. What was once a virus in the first film has become demonic possession in the second. I am not convinced of the demons, to be honest, and think that is Dr Owen’s perception. Guess we’ll find out in the first film.

I was ready to rate this film lower when something happened to restore my faith in it , bringing it more full circle than I’d believed, and unifying it with the first film.  I am scratching my head over one point, I must admit. The goal was to obtain blood from a particular someone (sorry, no spoilers here), but the man who wanted the blood got upset that the person was shot, when all I could think was he could take the blood anyway, what difference did that make? 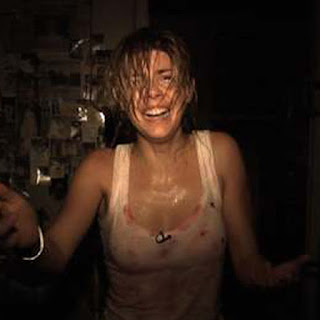 I think it was a worthy sequel. I’m giving it 4 Stars.