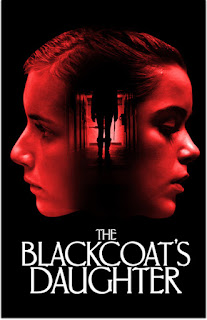 Rose (Lucy Boynton) and Kat (Kiernan Shipka) attend a rather exclusive private school for girls. But they have something else in common – at winter break, they’ve both been left behind by parents who never arrived to pick them up. The head of the school, Mr. Gordon (Peter James Haworth) tries to make the best of a bad situation, asking Rose to look after Kat. They will both be looked after by the nuns, but even so he feels responsible for them. Not enough to forego his own vacation, though, and off he goes.

Each girl has a secret, and neither is exactly enamored of the other’s company. Rose is afraid she is pregnant, and doesn’t pay attention to the admonishment not to leave the school, having her boyfriend pick her up for the evening. The isolated Kat has been hearing voices, a demon telling her what to do. His voice is growing more and more insistent. 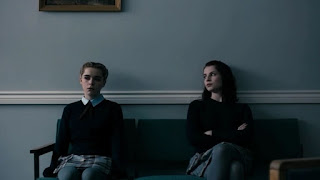 Meanwhile another girl, who calls herself Joan (Emma Roberts) is traveling toward the school. She is noticed sitting all alone by a couple, and the husband Bill (James Remar) offers Joan a ride, although his wife Linda (Lauren Holly) is less than thrilled. Bill goes out of his way to be kind to Joan, and she fears an ulterior motive. But he finally confides to her that she reminds him of his late daughter. 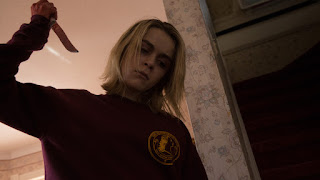 An uneasy Mr. Gordon returns prematurely to the school, only to be met with a most disturbing sight.

I have to confess that the film can be rather confusing, as there are three timelines here but they seem to be happening simultaneously, although they aren’t. I won’t give away any plot points, but I honestly had to look up an explanation of the ending to understand what I saw. Then it made sense. Having said that, I spent more time wondering what was going to happen, but if I should watch it again, at least I would understand it better. The music does indeed set the scene. And coincidentally, this was directed by the same guy who directed Gretel & Hansel, which I just reviewed. That guy is Oz Perkins, whose very famous father was Anthony Perkins. I guess horror genes run in the family.

Now that I understand the ending, I like it better and might give it a second watch sometime. For that reason I’ll give it 4 Stars. 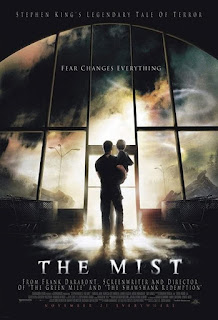 A major storm in a small town in Maine has wrought major damage to the dismay of the residents, locals and part-timers alike.  David Drayton (Thomas Jane) is on shaky terms with his next door neighbor, attorney Brent Norton (Andre Braugher), but they set aside their differences and begin to heal the rift in the aftermath of the storm, as both have suffered property damage. Norton’s vehicle was destroyed, so he asks to ride along with David and his son, Billy (Nathan Gamble) to get a few things at the grocery store. The store is pretty crowded with people who have also come to make purchases, and tempers are a bit frayed. But then a local, Dan Miller (Jeffrey DeMunn) stumbles into the store, blood on his clothes, claiming he just saw someone get taken by something in the strange mist that is creeping up on them, and no one should go out there.

David volunteers to go to the back of the store to look at the generator, and while he is there he hears something. He reports his findings to some of the men but they’re skeptical, so he takes them back there. They hear nothing.  A teenage boy offers to go outside. David warns him not to go, that something’s out there, but they don’t listen, and the grown men encourage him, overriding David’s concerns. But something is out there and it has tentacles…. 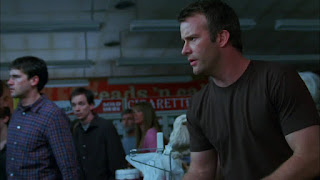 The Mist is based on a Stephen King short story of the same name. The story is actually better, of 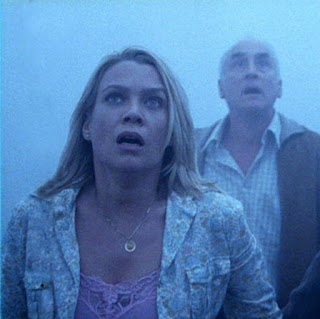 course, but they did a good job with the movie. You can imagine being caught in this supermarket, with these other panicked people, not knowing what is going on outside, and then seeing these very scary creatures that no one is equipped to deal with. What would you do? I don’t know, to be honest. Watch for the unexpected ending. I had already been spoiled for that, so it was no surprise, but I won’t disclose that here.  I’ll give this movie 4 Stars.