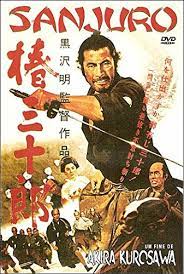 Iori Izaka (Yuzo Kayama) is the nephew of the chamberlain, Mutsuta (Yunosuke Ito). He hopes to enlist his uncle’s aid in making much needed reforms in the village, but his uncle doesn’t seem interested. The superintendent, Kikui (Masao Shimizu) is very interested, and tells Iori to gather his friends quickly so he can speak to them. As the young men discuss their plans, they are startled to discover that they have been overheard by a ronin sleeping in the next room. Sanjuro (Toshiro Mifune) is quick to tell them why they are wrong and, without even knowing either the superintendent or the chamberlain, he can describe them to a tee. Too late, he realizes the meeting is to take place at the spot where they are. And actually they are already surrounded. If they are to survive, they must listen to Sanjuro.

Sanjuro bluffs his way out of the situation with the men, and garners an invitation from vice-chamberlain Muroto to work for him. They learn that Iori’s uncle has been kidnapped and his wife and daughter are being held. The young men protest when Sanjuro tells them they need to rescue the women first,claiming that they must save the chamberlain. But common sense prevails when Sanjuro reminds them they don’t even know where he is being held, and perhaps the women have overheard something. Through the use of Sanjuro’s crafty plan, they rescue the women. Mutsuta’s wife (Takako Irie) is grateful but serene. She advocates that they not use so much violence, but that isn’t always possible. Especially when the young men don’t listen to Sanjuro and attempt to carry out their own plans. 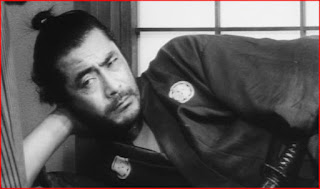 They hide in one of the young men’s homes, which just happens to be next to the home of Kurofuji, one of Kikui’s allies. Who would look for someone under their very noses? The enemy is cunning too and lead them on wild goose chases because the young ones are so quick to react. They just might ruin one plan too many! 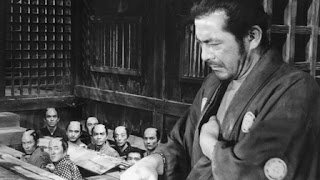 Sanjuro is the sequel to Yojimbo, with Toshiro Mifune once again playing the titular character, a wandering ronin. I liked this film as much as I liked Yojimbo. It definitely made me laugh at times.  I loved the interplay between Mutsuta’s wife and Sanjuro. I think he would prefer not to kill either, but sometimes he is pushed into a situation where it is inevitable. She is a great character, and so is her daughter Chidori (Reiko Dan). Once again, the cinematography and direction are excellent, as is the soundtrack. Definitely worth watching. I give this film 5 Stars.