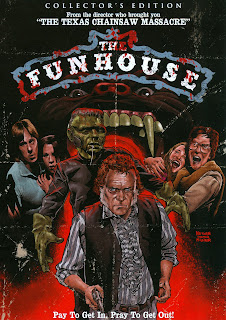 Amy Harper (Elizabeth Berridge) doesn’t get out much, under the watchful eye of her parents, but when the opportunity arises to go on a double date with her friend Liz (Largo Woodruff), she takes it. Amy’s date is hunky Buzz Dawson (Cooper Huckabee) and Liz’s date is the more nerdy Richie Atterbury (Miles Chapin). Amy tells her dad the two couples are going to the movies, instead of their original plans of going to the carnival, as her dad had told her not to go. But they end up there anyway. On a whim, they decide to spend the night in the Funhouse, and Amy tells her parents she is spending the night at Liz’s house.

Amy’s little brother Joey (Shawn Carson) has been a pain in the butt, but he loves horror movies, and he knows where his sister is going, so he sneaks out of the house and heads toward the carnival.  The two couples hide inside the Funhouse, and after hours, they’re making out when they hear a noise. They are able to see a room below them, where the drunken fortune teller, Madame Zena (Sylvia Miles) is talking to the man with the Frankenstein’s monster’s mask, who was operating the Funhouse. They make a transaction for money but when things don’t turn out to the man’s satisfaction, he wants his money back. Although technically he doesn’t say that since he seems to be only capable of grunts. When Madame Zena refuses, he flies into a rage and strangles. 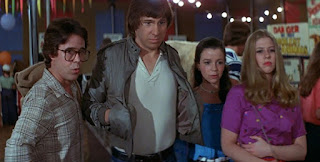 Now the couples want nothing more than to get away from this place. But that seems less and less likely, and the creature knows they’re there and is after them. Turns out he’s dealt with this sort of problem before. Can the teens make it out of the Funhouse alive?

This film has something of a pedigree, with director Tobe Hooper, who you may recall from such films as Poltergeist and Texas Chainsaw Massacre. And writer Lawrence Block. Their combined work adds some quality to what is otherwise a forgettable film. It’s not so much that it’s bad, but I think the “freak” who is the oddball in the film and prone to violence if not handled correctly has been a bit overdone. There is no explanation of what is wrong with him, and how he came to be the way he is.

All in all, not a bad film and worth checking out. I’ll give it 3.5 Stars, mostly because I like Tobe Hooper 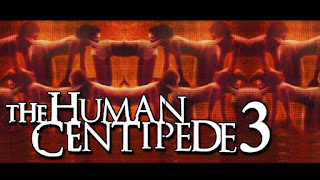 To be honest, I wasn’t going to touch on this despite watching it today, but I’ll give it a brief mention anyway. First, you need to watch the first two, just because. They’re not exactly sequels but they also are. In the second one, we saw the first one as a film on DVD, and now in the third one, the first two are films on DVD. The doctor from the first film, Dieter Laser, is back as Bill Boss, the sadistic tyrant of a prison warden. Laurence R. Harvey, who was in the second film, is back as Boss’ accountant, Dwight Butler. Boss is beyond bad and terrorizes everyone, including his secretary Daisy (Bree Olson) and makes inappropriate sexual demands on her (not that there are appropriate sexual demands, just saying).

Butler is obsessed with the Human Centipede films and makes Boss watch them, but he isn’t impressed. Neither is he impressed with the idea of making a human centipede at the prison, although Butler argues it will solve a lot of problems, including morale, discipline, and budgetary issues. The prison doctor, Dr. Jones (Clayton Rohner) is also a fan of the films and claims he can make it happen. Together, he and Butler think they have even improved the original techniques. Btw, Dr Jones is lucky to be able to work there, as Boss reminds him, because he has no medical license, so can’t be employed anywhere else. Boss changes his mind when the plan meets with the approval of Governor Hughes (Eric Roberts), although the governor doesn’t really realize what they intend to do. 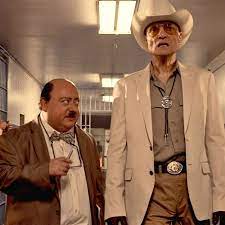 Well, there is the basic premise. Let me just say it’s the weakest entry of the three, and most of the film consists of Boss’s ranting and raving and sadistic treatment of everyone inside that prison. Of course it’s gory, it’s a Human Centipede. Is there an actual 500 man centipede? Yes, but not until almost the very end. If you just want to finish the series, go ahead and watch it. If you want the same experience as the first two, do yourself a favor and skip it.

Well, I guess that wasn’t really brief, was it? Look for Tom Six playing himself. And you might remember one of the prisoners as playing the president in The Fifth Element. Anyway, I’ll just give it 2 Stars and will not rewatch.