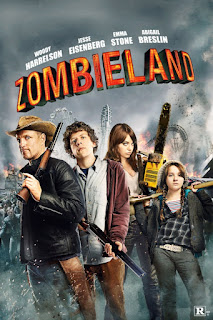 Something has gone horribly wrong, and the United States of America has become Zombieland. Life will never be the same again. Columbus (Jesse Eisenberg) is just trying to get back to his family in Ohio, traveling the dangerous highways, trying to avoid being eaten. He has certain rules that he lives by to ensure his continued existence. In his experience, you ignore these rules at your own peril. Such as Always Check the Back Seat. And Wear Seat belts.  He meets up with another human unexpectedly, Tallahassee (Woody Harrelson), who is on his way to Florida. The two decide to travel together, at least for now.

Tallahassee is a little odd, to say the least, especially when it comes to his obsessive search for Hostess 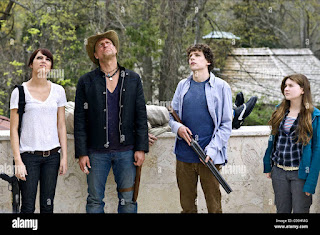 Twinkies, which thus far has been pretty pointless. While Columbus is a stickler for his rules, he is also a compassionate guy. When the two run across two sisters, Wichita (Emma Stone) and Little Rock (Abigail Breslin), he can’t help but feel sorry for them. Little Rock was attacked and is about to turn into a zombie. Rather than suffer such a fate, she implores Wichita to end it all, but she finds she can’t and asks Tallahassee and Columbus for help. That does not turn out well for the guys, and the girls manage to scame them out of their vehicle and most of their possessions.

The two groups cross paths again and travel together for a while. The girls reveal they are headed toward an amusement park, where they spent some very happy times before. Columbus finds himself more and more attracted to Wichita, but finds himself foiled every time he makes a move. And just when he thinks things are going well, the girls ditch them again. 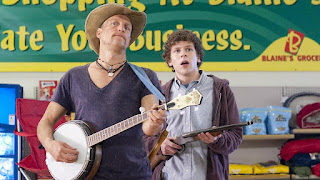 Can Columbus accept this ending, or will he pursue the girl of his dreams through a dangerous zombie-filled country?

This movie is a mix of humor and horror, with a decided emphasis on comedy. The zombies are pretty blood-curdling, and I sure wouldn’t want to be trapped with these things as they are not the slow lumbering figures of early films. They move along far too quickly for my taste, even though they are not articulate. One of the funniest scenes involves Bill Murray playing himself.

All in all, this was a fun watch. I would recommend it. I’ll give it 4 Stars.