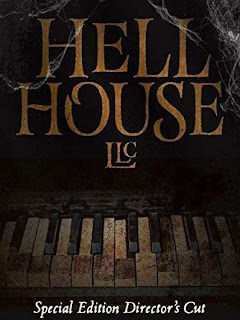 The grand opening of a Halloween haunted house in the Abaddon Hotel in 2009 leads to inexplicable tragedy. Fifteen people died, including both those on the tour and the staff. Five years later a documentary crew travels to the small town of Abaddon, seeking answers. However, these are not readily forthcoming.

A video taken by one of the guests on the tour ended up on You Tube. Plus the owners of the attraction have everything documented from the time they first arrived. The documentary crew locates a surviving member of the staff, Sara Havel (Ryan Jennifer) who reluctantly talks to them and tells what she knows of that night, and the time leading up to it. 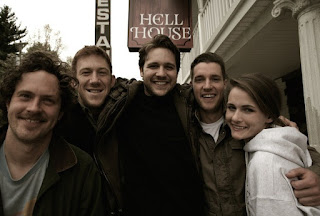 From the moment of their arrival, the hotel is found to be in less than good shape and very creepy, but 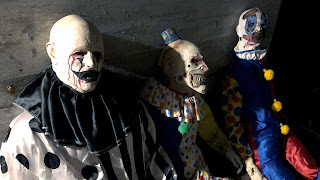 that can only serve to heighten the atmosphere they want to create on Halloween night. The friends have definite ideas on how to achieve the effects they want in order to scare the wits out of their guests, including very eerie mannequins, a haunted bar and piano, and a basement that will provide the biggest scares and serve as the finale to the tour. Sara will be chained to the wall, her job being to scream her head off.

Even before opening night, things begin to get creepy in the haunted hotel. Mannequins are inexplicably moved, mysterious sounds can be heard. At one point, Paul (Gore Abrams) mysteriously disappears,, and when he reappears he has no explanation for what happened, or much of anything else. Tensions begin to run high. And then opening night arrives, and all hell breaks loose…. 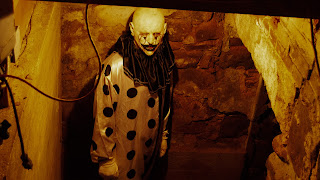 This found footage pseudo documentary was pretty well done, in my estimation. Between the film taken by the event staff and that of one of the guests, there is a pretty complete picture of that night, even if it’s not always clear what happened or why. There is a definite creep factor which only grows as the events unfold. Have you ever wanted to scream at the screen to tell the people to get out of there. By the end of this movie, that is how I felt.

I think this was a pretty scary film and it was well done. I look forward to seeing more of the series. I’ll give this one a strong 4 Stars. 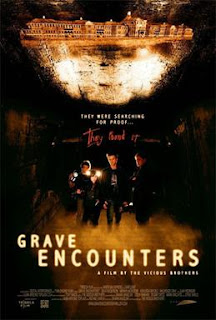 Lance Preston (Sean Rogerson) leads a team of paranormal investigators in the reality TV show Grave Encounters. Every week they visit a different haunted site and lock themselves in to encounter and record the supernatural. The sixth episode of the series is being filmed in an abandoned psychiatric hospital. Lance and his cast have themselves locked in by the hospital caretaker Kenny (Bob Rathie) who promises to return to unlock them the following morning at 6 am. Lance and the others aren’t particularly worried because they realize something the TV audiences don’t – they are fakes, and they are not above paying someone to say he saw something he didn’t. So what’s a night locked up in an abandoned building?

They set up cameras on various floors in order capture whatever happens. Kenny the caretaker gave them a tour of the building before he made his departure, mentioning various points of interest. Such as the window which is sometimes found to be unlocked… from the inside. Or the bloody tub where a young girl killed herself.  The abandoned building is very dilapidated and neglected, but what’s one night among friends? 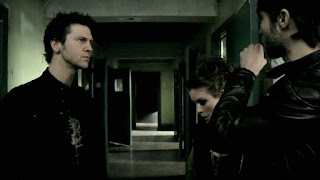 Strange things begin to happen.  The high-strung Matt (Juan Riedinger) disappears. A feeling of foreboding pervades the air, and things are starting to get real. More real than they’ve ever been in the history of this fake TV show.

Grave Encounters consists of the found footage of the filming of the TV show, some 70 hours.  Filmed 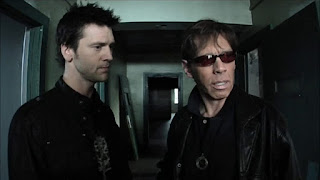 on a shoestring budget and at night, using flashlights, there is a distinctly creepy and unsettling atmosphere about this hospital. If I’d ever considered a paranormal type lock-in before, this film cured me of the idea.

A lot of the horror is subtle yet creepy, but don’t worry. There are jump scares as well. At first the film crew goes into this hospital with the attitude of this being just another job, but that changes as they begin to realize that just maybe they’ve run across an actual haunted building. I thought the cinematographer did a good job giving Grave Encounters the appearance of found footage, and the actors are very believable in their descent into terror 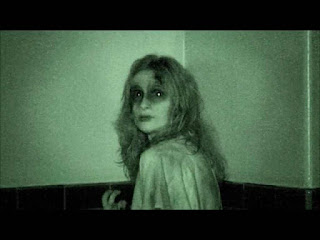 I thought this film succeeded in being creepy and scary and was well worth watching. I give it a solid 4 Stars.