The Little Girl Who Lives Down the Lane 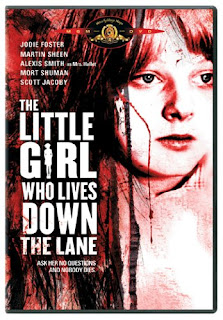 Rynn Jacobs (Jodie Foster) is thirteen years old. She and her father have just moved into a rental house in a small town in Quebec. But things are not as they appear to be. Not at all.

Rynn keeps to herself, going quietly about her business, which does not include going to school. She does everything herself, and her father is never seen, presumably busy. 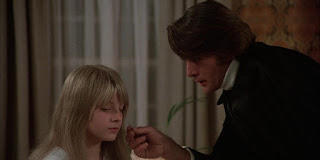 Halloween night is her birthday, and as she is beginning a solo celebration, complete with birthday cake, an intruder arrives. Frank Hallet (Martin Sheen) is the son of the landlady, and he is quick to make his intentions quite obvious. Although he claims to be scouting ahead for his two children, who are trick-or-treating, he is more focused on how pretty Rynn is as he makes himself at home. Disgusted, she manages to get rid of him, but for how long?

The next day the landlady, Cora Hallet (Alexis Smith) waltzes into the house, making demands. Rynn stands up to her, and Mrs. Hallet quickly lets her know that she doesn’t care for the teen’s attitude. She wants to get something out of the cellar but Rynn tells her to come back. Obviously this woman is going to be a problem. 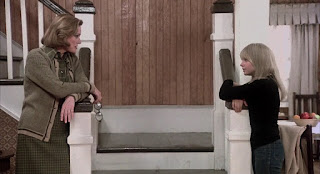 When the landlady’s next visit goes awry, Rynn finds herself in a dilemma. But a knight in white armor, in the guise of young teen magician Mario Podesta (Scott Jacoby) appears and she talks him into assisting her. Rynn also receives a visit from local policeman Ron Miglioriti (Mort Shuman). He asks to see her father, but Rynn puts him off. She puts off everyone who tries to see him. Why? Is he even there? What is going on in this house that she doesn’t want people to find out about? 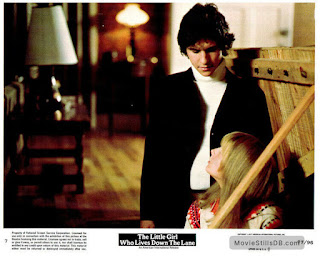 I wasn’t sure what to expect from this film, as it was shot back in 1976. I was pleasantly surprised. Of course you have a great cast, with Jodie Foster and Martin Sheen. Sheen is very creepy as the would-be pedophile who is intent on having his way with a 13-year-old girl. Jodie Foster is excellent as Rynn, just trying to get by under very difficult circumstances. The wig threw me off a little but you get used to it. I guess it’s a story about survival, of doing what you have to do even if it’s not what you would prefer to do. But there are bad people in this world, and sometimes accidents do happen. And when there aren’t accidents, there’s murder.

Good production values, well directed and filmed, good story. Not very gory at all but very entertaining and well-paced. I enjoyed this and would recommend giving it a watch. I give this film a strong 4 Stars