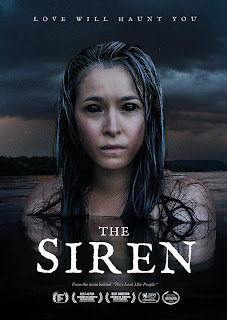 Jonah (Chase Williamson) and Eva (Lindsey Garrett) are to be married in a week’s time. Jonah’s brother Mac (Michael Aaron Milligan) decides they need to take Jonah on a last fling. Off they go along with Jonah’s best friend Rand (Hayes Mercure) and another friend Elliot (Randy McDowell). The strip bar they end up in is rather seedy, but Jonah doesn’t mind as he has no intention of doing anything wrong. But Mac is approached by a stranger who calls himself Mr. Nyx (Justin Wellborn) and he accepts the stranger’s offer of a lot more fun.

The four men follow their would-be host out in the literal middle of nowhere. Jonah and Rand want to turn around and leave but Mac insists. They finds themselves at a large and elegant manor. But things begin to get weird. They’d foolishly consumed from mushrooms given to them by Mac at the other bar, so they can’t be sure if they’re tripping or not. Mr. Nyx sends Jonah off for some private entertainment, then tells the others he is going to exact a price for this… in the form of a memory from each of them. He instructs them to look at their shoe. Rand is reluctant, but he is forced to obey. 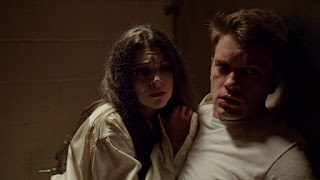 Jonah finds himself outside of a shuttered room. He expects to see the typical strip tease/sex show, but when the shutter goes up, he sees a girl, Lily (Hannah Fierman) on the other side. At first nothing happens, but then she begins to sing, and Jonah finds himself lost in her song. After she is done, the overwhelmed Jonah leaves the room and tries to gain entrance to hers, only to discover she is padlocked inside. Realizing she must be the victim of sex trafficking, he determines he must save her, and goes back to the bar to enlist his friends’ aid. 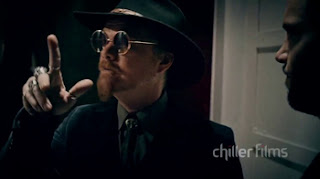 Siren is a spin-off from the V/H/S series, and we see a couple of familiar faces here. Hannah Fierman appeared in the first film and Justin Welborn appeared as the magician Dante the Great in V/H/S Viral.  SIren is different from the others in that it doesn’t involved found footage or several stories. This is the story of a bachelor party gone horribly wrong.  As the title tells us, the creature in this film is a siren, but they have changed the definition (at least from anything I’m familiar with). This siren has vicious teeth and a long tail that does… interesting things.

I think Siren is sufficiently chilling to satisfy most horror aficionados, and has definite creepy vibes, 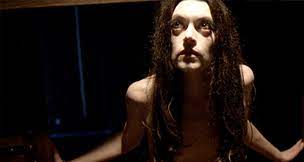 especially from Mr. Nyx. You might actually recognize Lily from the first film, with the guys in the motel room. Well, she’s back, but she’s under control now. At least until her knight in shining armor, aka Jonah, decides to come to the rescue. That should teach him to stick his nose in without learning the facts first.  Also, you know something terrible is going to happen when common sense tells you not to do something but everyone else seems hell bent on doing it. I think following a stranger into the middle of nowhere qualifies as definite stranger danger! On the whole, it’s a decent film although it could have been better. I’ll give it 3.5 Stars.