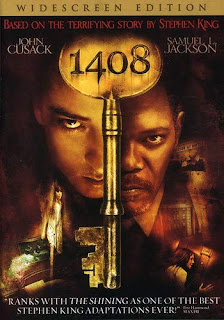 Mike Enslin (John Cusack) is a writer who makes a living visiting and visiting/staying at haunted locations and writing about them, usually debunking them in the process. Once upon a time, he had greater literary ambitions, but this is what currently pays the bills. To finish his latest book, he travels, albeit reluctantly, to New York City to the Dolphin Hotel, where Room 1408 is said to be a place of great evil. Mike hasn’t been back to NYC since… well, just since. But one night can’t hurt, right?

When he calls to make the reservation, he is outright refused. But after threatening legal action, and finding a law that actually requires them to rent him the room if it’s unoccupied, he shows up, only to be greeted by the manager, Gerald Olin (Samuel L. Jackson). Olin tries to dissuade Mike, attempts to bribe him, but nothing works. Enslin insists on the room and nothing else. So that’s what he gets. 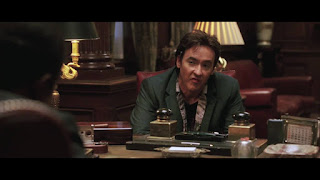 Olin gives him a dossier on the deaths that have occurred in that room, and quite a collection that is, including a number of suicides and many unknown deaths. Mike is undeterred and pries into every nook and cranny. But then things begin to happen, and he has to wonder if there isn’t some truth in the stories. The question is will he be able to make it out of this hotel alive?

1408 is based on a short story by the master of horror, Stephen King. If I read the story, it’s been too 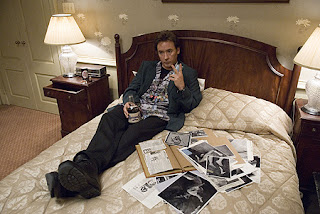 long ago to remember, so I can’t exactly compare the film to the story. However, thinking about this movie reminds me of something I saw in the Witcher TV series. Geralt makes a passing detrimental comment regarding Jaskier’s vocal abilities, and Jaskier insists that Geralt tell him how he really feels. Geralt says it’s like ordering a pie and finding no filling. That’s the feeling I get with 1408. Cusack and Jackson look good, and the special effects are slick and sufficiently spooky, but when you get insist, there is not substance.

There are actually a couple of endings. I only watched one. From what I read, the other is even more depressing. Honestly, there was never an explanation given for anything that happened, as if you’re meant to take it at face value and not question anything. But in my mind that is leaving out the best part of the story – the resolution. Were we meant to come away with the idea that Mike Enslin has evolved as a person since his arrival in this haunted room? That bearing witness to the suffering of others, and the knowledge of his own, has made him less smarmy and more understanding?

Do we sympathize with him because of the tragedy in his own life? And disregard the fact that nothing he goes through is explainable? Or is this just an excuse to let the special effects crew have a field day? I didn’t find the movie particularly scary, more weird. I’m sure the story is much better. I would suggest reading that instead. I’ll give this film a somewhat shaky 3.5 Stars. 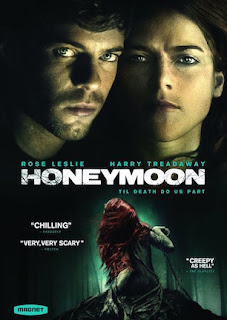 Paul (Harry Treadaway) and Bea (Rose Leslie) are a young couple in love and on their honeymoon. They go to a remote cabin owned by Bea’s family. It’s the off season and no one else will be around. Ain’t love grand? While walking the area, they come across a restaurant. They enter the restaurant to see if it’s open, and a surly young man tells them to leave before recognizing Bea as an old friend of his. His wife appears and tries to warn them to leave but her warning is cut short by her husband in a rather forceful manner, leaving Paul more than a little confused.

Paul wakes in the middle of the night only to find Bea missing. Frantic, he searches the woods and finds her standing there. She startles at his touch, but then laughs it off as sleepwalking. Paul isn’t so sure, however. Suddenly he begins to mistrust her. It seems like she is lying about something… or everything. Wakened by a strange light in the middle of the night, he suspects Bea knows more than she is letting on. But he can’t put his finger on what that is. 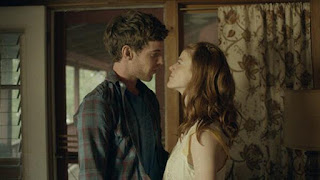 Bea becomes more and more secretive… and Paul begins to wonder who she really is. At first, he thinks it’s her old friend Ben, but when he tries to confront him, Ben isn’t there and his wife Annie is also acting strangely. Can the two women’s actions be connected? 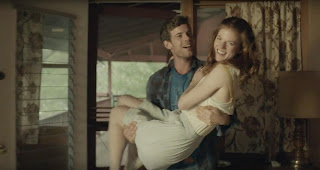 This was an interesting mix of horror and sci-fi. The best things about the film are the performances of the lead actors. I liked Harry Treadaway in Mr. Mercedes and Penny Dreadful. Rose Leslie is best known for playing Jon Snow’s Wildling girlfriend Ygritte in Game of Thrones. The atmosphere is chilling and suspenseful as two people who love each other dearly find themselves being torn apart by forces they can’t comprehend. The ending is unexpected and eerie. Definitely worth watching, I give this film 4 Stars.