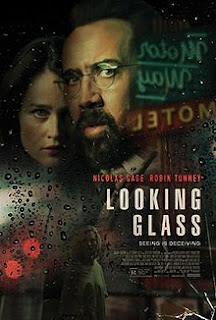 After suffering a devastating personal loss, Ray (Nicholas Cage) and Maggie (Robin Tunney) buy a motel in the middle of the desert to start over again. But things are strange from the get-go.  Ben (Bill Bolender), the man who sold them the motel, isn’t there on their arrival, having left the keys and a hastily scribbled note outside the door. When Ray calls him, he is very mysterious and doesn’t seem inclined to discuss anything, but wishes them well.

Even though they aren’t officially open, a woman arrives and Maggie checks her in. Then a trucker named Tommy (Ernie Lively) shows up. Apparently he’s a regular, and prefers to be in Room 10, which was always the arrangement with Ben. Ray has no problem with that and gives him the key.

Local law enforcement, Howard (Marc Blucas) shows up, looking for the pot of coffee Ben usually has going. Ray obligingly makes him a pot. The deputy says the coffee is so good he’s going to come by every day. 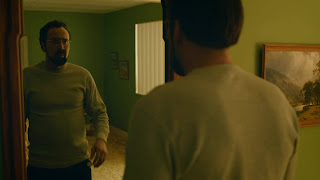 There is a lot of work to do on the motel, but Ray is handy. In looking around, he discovers an entrance that has been padlocked and chained shut. He cuts off the lock and heads inside to a storage area. But then he notices something weird, in the wall, close to the ceiling. He decides to investigate and discovers a small tunnel. Ray crawls through the tunnel and up a ladder to find himself peering into Room 10, where the maid is vacuuming. Something is very strange here, but what?

Ray and Maggie’s relationship is on edge. Ray sneaks off to the looking glass and begins to spy on

This wasn’t a bad film, but it is a sort of confusing one that could have benefitted from some clarification. Or even explanation. I confess to being a huge Nic Cage fan, so I’ll try anything he’s in once. I did like this better than Prisoners of the Ghostland. It makes more sense than that one. Even so, we are left with questions. Such as the true nature of their daughter’s death. Also, the motivation of the killer who is identified at the end. Like I said, not a bad film, but not great either. Worth watching for Nic alone, but even this isn’t necessarily his best effort. I’ll give it 3 Stars