Girl in the Box 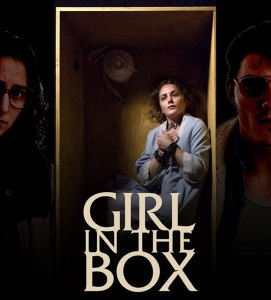 1977 was a different time, when you could hitchhike all over the country and not worry about anything but your destination. Colleen Stan (Addison Timlin) is hitchhiking when she accepts a ride from a married couple, Cameron and Janice Hooker (Zane Holtz and Zelda Williams). What she doesn’t realize is this couple is not normal… and they’ve already buried one body.

It doesn’t take long for Cameron to put his horrific plan for Colleen into motion. Driving her to an out of the way spot, he handcuffs her and forces her put her head into a heavy wooden box and covers her body with a blanket so no one will see her, then drives home. After dark, he moves her inside and into the basement. 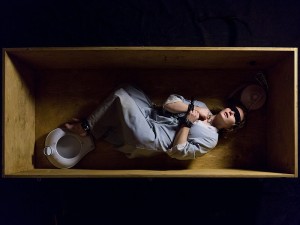 Cameron’s wife Jan is very meek and submissive, as if she is afraid of doing anything to anger her husband. She goes along with what he wants, but it’s clear that on some level it’s disturbing to her. But in her own way, she can be just as cruel as him. Cameron quickly controls the helpless Colleen and lays down the rules. She is to call him Master and Jan is Ma’am. She is to do everything requested of her. If he says the word, she is to run to the arch in the living room, disrobe, and stand there with her hands pointing up.

Fearful of discovery, Cameron builds a coffin-like box for Colleen, which he keeps under his and Jan’s 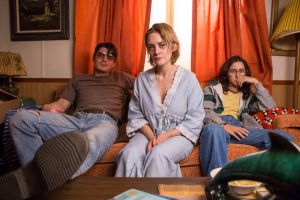 bed. Colleen is forced to stay there up to 23 hours a day. He tells her about the Company he works for, and how people have slaves, like her, and forces her to sign a slave contract. He warns her that the Company will hurt her and her family if she should escape. And she believes him.

Colleen settles into her life of slavery and drudgery, and life goes on, Jan has a baby, and she’s still there. But she is so brainwashed that when Cameron actually allows her to go home to visit her family, she tells them she is fine! But Jan is reaching her breaking point, as she sees how Cameron prefers Colleen, whom they call K. She leaves her husband, with their daughter, but comes back when he is gone in order to free Colleen and send her home.

This is based on a true story, and it is horrific. The film is well done, and I think the actors did a good job. Cameron is creepy and cruel, and Jan is subdued most of the time, as if she has given up on life. I can’t imagine having to endure such a life for seven years! Colleen Stan must be a very strong woman. I liked the movie (not the subject matter of course) and I give it 4 Stars. 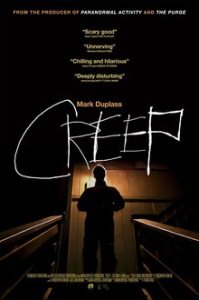 Aaron (Patrick Brice) accepts a job to video a man named Josef (Mark Duplass) for one day for a lot of money. He drives to the man’s cabin to begin his day, and learns that Josef has terminal cancer, and wants to leave the video as a message to his unborn son whom he will never meet.

Josef is very fond of pranks, as Aaron quickly discovers, and he never knows when he’ll find Josef lying in wait to pounce on him. The two proceed to spend the day together, hiking far into the woods at one point, and talking all the time. They have some heartfelt moments together, and as the day progresses, begin to tell one another their secrets. 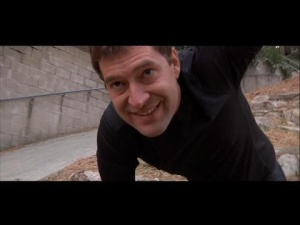 Aaron begins to discover there is something a little (or a lot) off about Josef, and the wolf mask he named Peachfuzz is the least of his worries. After answering Josef’s phone, while he is passed out, Aaron begins to realize the predicament he is in, especially when Josef’s sister herself says to get out of the house. Now.

Aaron makes it home, and he thinks it’s over now. Except when the package arrives, and he realizes Josef knows where he lives. And he isn’t about to stop stalking Aaron anytime soon. 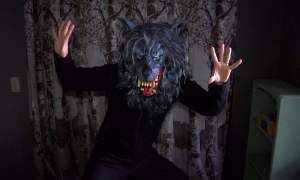 At first, I didn’t know what to make of this film, other than a weird kind of sob story about a dying man. But it is a lot more than that. In fact, it isn’t even that. The title says it all. Josef is a creep, and he will creep you out. The acting was good. I understand a lot of it was improvised. Not surprising since they are also the writers of the film, and Patrick Brice is the director. This one will definitely keep you on the edge of your seat, bracing for whatever is about to come next. Well worth watching. I give it a solid 4 Stars.

Spiral: From the Book of Saw 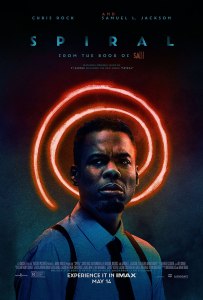 Detective Zeke Banks (Chris Rock) does not tolerate bad cops. Ever since he turned in one of his fellow officers, he hasn’t been the most popular guy in the precinct. He responds with snarkiness and curses and an ef you attitude. His commanding offer, Captain Angie Garza (Marisol Nichols) is trying to help, but he’s resistant to her efforts. To make matters worse, she assigns him a partner, William Schenk (Max Minghella). She wants Zeke to show him the ropes. When a new case comes in, Zeke reluctantly takes the newbie with him.

The initial report says a bum was killed by a train in the subway. But close investigation reveals this was no bum. Not too many bums wear Fitbits. A package shows up at the station addressed to Zeke. It contains a flash drive, as well as a tongue and a policeman’s shield.  Turns out the dead man is Detective Fitch, who Zeke had been at odds with. Accused of giving false testimony against innocent people, his tongue was torn out. And judging by the video on the flash drive, the killer is a Jigsaw copycat. 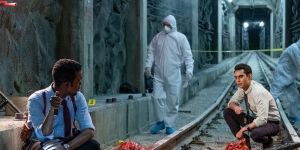 When Captain Garza tries to give the lead on the murder investigation to another detective, Zeke lashes out and lets them know he should be the lead, and he doesn’t care if the others like him or not. Angie finally gives in and Zeke takes the lead.

When Zeke goes home, he finds his former captain sitting there – none other than his father, Marcus 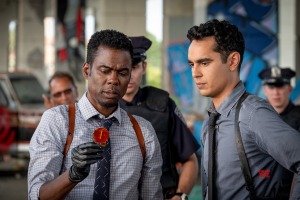 Banks (Samuel L. Jackson). Zeke is none too pleased to see him, and maybe their relationship isn’t the best. But Zeke reluctantly agrees to meet his father the next night for dinner (they live in the same building) and to discuss the case.

More cops are being killed, and more messages are being left as Zeke delves into what is happening and why. Is the killer a wannabe Jigsaw, or are his motives more personal?

Having seen all eight Saw films, I was very excited to learn about this new addition to the fandom, and greatly looked forward to seeing it. I was not disappointed. I have always liked Chris Rock and he does prickly very well, with a get-out-of-face attitude that just doesn’t quit. He’s trying to play the hand he’s been dealt, but the people around him don’t make that easy. His new partner turns out to be pretty nice, and Zeke warms to him as he puts a picture of his family in the squad car. Plus he’s a hard worker who isn’t afraid to stay later to get things done. 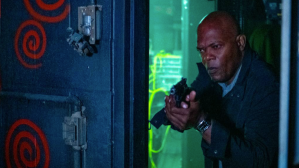 While technically not an actual Saw film, Spiral is definitely a part of the Saw family. Lots of gore and guts for those who are fans of the original, an interesting storyline, and an unexpected twist that will keep you guessing. I really hope they make another one. There is great future content there. I give this film 4.5 Stars.