Twentieth Century Boys, Vol 19: The Man Who Came Back 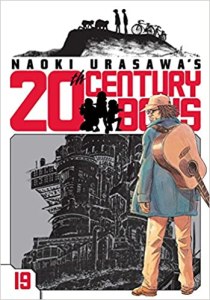 Friend’s right-hand man, Manjome, has approached Kanna and Otcho with a shocking proposition—he wants them to kill Friend. Furthermore, he believes Friend is not who he says he is and that Fukube is actually and really dead. That’s a lot for them to take in.

Chono is fishing on his time off and he is joined by the newcomer, the guy with the guitar. He keeps trying to get this Yabuki Joe to admit that he is really Kenji, but so far that hasn’t happened. Meanwhile, Maruo and Namio and an assistant producer at the TV station turn to Kamisama, looking for a way to get the producer to safety as he has seen too much. Koizumi is still at the bowling alley, and she is utterly bored. She even hates bowling!  But when she picks up a bowling ball just to show someone how it’s done, Kamisama realizes she might be the key to revitalizing the dying industry!

Chono travels with “Joe” toward Tokyo, but they’re stopped outside a great wall with a fortress, unable to pass. A town has sprung up there, filled with people trying to cross over to get to Tokyo. Forging travel permits is a big industry there. The trouble is that the fakes are quickly spotted for what they are, and the people carrying them are shot on the spot. Still, people try. A man in Western cowboy garb, who goes by the nickname of Ichi the Spade, catches some of the people leaving the bad forgery shops and convinces them not to try it, but to use his bus service to reach the other side through an underground tunnel. Can he be trusted?

Ichi runs into Joe and Chono, and admits that he knows Chono has a bounty on his head. He tells Joe about a man who used to be a really good forger but who isn’t in business anymore. They go to see him, and he turns out to be one of the manga artists who used to live next to Kanna. His partner was trapped on the other side, so he has had to go solo. He doesn’t make forged passes anymore because he doesn’t want to be responsible if people get killed because of him. Joe persuades the manga artist to make him an ID and agrees to take his pages to his partner inside of Tokyo, at the same time that Chono finds himself betrayed.

Joe takes his forged pass and not only gets inside the gate, but he comes back and tells the manga artist to make enough passes for everyone in town. It’s time for everyone to leave. But Kenji/Joe is about to meet someone from his past, someone who is the epitome of evil.

All right, it’s out in the open now, let’s say it all together.  KENJI IS ALIVE!  I’ve been saying that for some time, and I am finally vindicated!  Huzzah! Okay, back to business.

I can feel everything winding down, the beginning of the end. Everybody and everything are falling into place, wherever they are meant to be. Kenji is headed toward Tokyo, and nothing and no one can stop him. He has the strength and courage of his conviction, and he has the immoveable force which has sustained him for all these years—his music. I can’t wait for him to connect with Kanna and the others again! And to finish what was begun so long ago.

Now the mystery remains as to who Friend is, since we know Fukube is really dead. And has been for some time, apparently. We still need to see the Holy Mother make her appearance. Although I once doubted her, now I suspect her arrival will be on the side of good, and hopefully she and Kanna can have a chance to have a real relationship.

This series just gets more and more exciting. Only three volumes left, can’t wait for the next one!