In 2014, TV host Zak Bagans purchased a house in Gary, Indiana sight unseen. The previous owners, the Ammons family, claimed the house was infested with demons, and that the demons had tortured and possessed them before they moved out. Immediately upon arrival at his new home, Bagans began to film a docudrama.

During the making of this documentary, Bagans claimed to have been so ill that he couldn’t leave his room for 8 days. People he spoke with were hurt and some where hospitalized. Members of his crew quit or were fired. Bagans attempted to speak with the former owners, but they refused to speak to him at their new home in Indianapolis. Her brother Kevin did agree to speak with Bagans. When asked, he admitted her reluctance to be involved in the documentary was because they’d received an offer from a film company for the rights to their story. After speaking with Bagans, the Ammons wouldn’t allow Kevin back into the house, claiming he might have picked up something from Bagans, who’d been inside the demon house at that point, and were concerned he would bring it back to them. 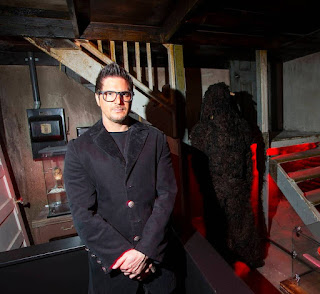 family walk backward up a wall and across the ceiling. Five minutes after the alleged incident, the child had no memory of what they said happened. The social worker turned the case over to someone else. A Catholic priest, Father Maginot, requested and received permission to perform an exorcism.

Various people who were involved in making the docudrama showed unusual behavior, up to and including becoming aggressive to one another. In the basement of the house, they discovered a small dirt area beneath the stairs – the only part of the basement like this – and Bagans believed they may have found a Satanic altar. In a final bid to settle the matter once and for all, Bagans had himself sealed into the house to spend the night.

Okay, where to start. A documentary is not meant to take sides, simply to present facts so the viewer can decide for themselves what to believe. Not sure if that was entirely true here. Non-demonic solutions were briefly touched upon, such as carbon monoxide poisoning, but not was investigated very thoroughly. At least they didn’t mention it.  And also, in case you don’t recognize the name Zak Bagans (which I didn’t), he hosts a show called Ghost Adventures, which tells me he is predisposed to believe.

In order to believe in demons, I think one has to believe in Satan, which I don’t. But I do believe in the power/energy that resides in all of us, which most of us don’t know how to control or draw upon. By the same token, why couldn’t there be a negative counterpart of this energy, one that people refer to as demons, for lack of a better word.

At times, this film seems rather too staged for my liking, and perhaps that is the fault of the editing, or the voiceovers, obviously done after the fact. Besides the Ammons, other former residents as well as neighbors said they had no problems with the house.  Some people in Gary believe the whole thing is a crock, made up by the Ammons in order to cash in on the story. There is no overwhelming evidence to support the demon theory as being the true solution. Trying to paint an image of a twelve foot tall goat-headed being didn’t exactly win me over either.

For viewing pleasure alone, and not on believability, I’d give this about 2.5 Stars. The thing to keep in mind is that if you’re highly suggestible, be careful. This might make you think you heard something.