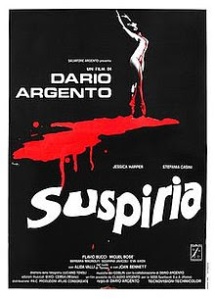 On a dark and stormy night, American Suzy Bannion (Jessica Harper) arrives at the prestigious German ballet school where she has been accepted as a student only to be told by a voice over the  intercom to go away. Just as she arrives, she sees another young woman rush out of the building, who mutters some strange words before disappearing into the night. Suzy Bannion returns the next day to a much better reception.

From the beginning, Suzy shows herself to be strong-minded, a trait not necessarily desirable at the

school, which seems to be oddly controlling. Since a room is not immediately available for her, Suzy makes arrangements to sleep elsewhere and is settled in before going to her first rehearsal. There she falls perilously ill. Despite her protestations, the autocratic dance mistress pushes her until she collapses. The proprietress of the school, Madame Blanc (Joan Bennett) is very solicitous and Suzy is cared for the school’s Professor Milius (Rudolf Schundler) who puts her on bedrest and a bland diet, although he prescribes wine to build up her blood. While she is asleep, someone has gone to her lodgings and brought her things back although Suzy was very clear that she did not want that!

Strange things are happening at the school, including an infestation of grotesque maggots on the floor just below the attic, which necessitates the girls on that floor sleep downstairs in a makeshift dormitory arrangement. Suzy befriends another girl, Sara (Stefania Casini), who tells her a story about a strange snoring noise. Sara wonders where the teachers go at night, since they all leave at 8:30, and what do they do?

The blind piano player for the school is cruelly dismissed by the dance mistress, and ends up meeting a horrible death. Suzy and Sara are determined to get to the bottom of whatever is going on at this school But at what price?

This movie was recommended to me, I forget by which site, as a  horror gem, but for the life of me I am not sure why it has garnered such great reviews. The sets are uniquely strange, and the cinematography isn’t bad, sometimes rather effective. Ditto for the background music, with performances by a group called Goblin. The plot is more shocking than scary, and that has to be some of the worst movie blood I’ve ever seen. Straight up looked like red paint. 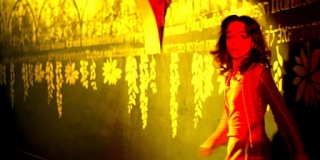 And the acting… oh, the acting…. Sorry, but it was horrible. I think I could do better, and I don’t act. Joan Bennett you may remember from Dark Shadows. I also remember her from an old version of The Man in the Iron Mask. But her delivery has always been rather stiff and stilted, and nothing has changed there. Apparently, this was her last film. The lead, Jessica Harper,  turned down in a part in Annie Hall to do this film. I wonder how she felt about that later.

I read that the actors spoke different languages while shooting and all was dubbed into English later, which accounts for the bad sound of the dialogue. The ending doesn’t provide a satisfactory explanation of what just happened. I leave it to you whether to even bother watching. I’ll just give it a shaky 3 stars out of 5, and hope that the 2018 remake is better.

Su-an Kim is a young girl who lives with her father, as her parents are currently separated. Her mother lives in Busan, and Su-an misses her greatly. But her father is a busy man, and he doesn’t have time to take her to visit her mother. Seems like he doesn’t have time for a lot of things. Su-an secretly telephones her mother and says she wants to see her the next day, and swears she can take the train alone. Her father overhears, and tries to placate her by giving her her birthday present early. Turns out Dad wasn’t paying attention, and Su-an already has a Wii. So he finds himself agreeing to take his daughter to Busan to visit her mother.

As the train prepares to leave, a young lady manages to climb aboard, but she seems to be in a bad way. And as the train pulls out of the station, something very odd seems to be happening. 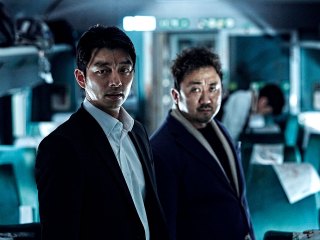 What began as a simple train ride becomes a fight for survival, as people become rabid zombies right before everyone’s eyes. And this strange phenomenon is happening everywhere. Why and how did this start? And how can anyone survive/ Is there any place that is safe? 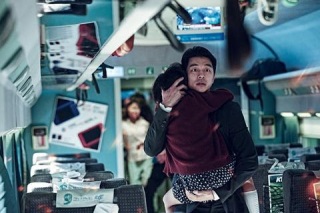 This was a very unusual zombie film, and I loved it. More than a simple horror film, it is about people and about survival, about working together for the common good. But the situation also brings out the selfish and the brutal in people, who can only see as far as their own needs. Everything in this Korean film is excellent, from direction to acting to story to cinematography. I am looking forward to seeing the sequel.

Word of advice – keep some Kleenex handy for this one, you’ll need it. I give this film a very strong 5 star rating.