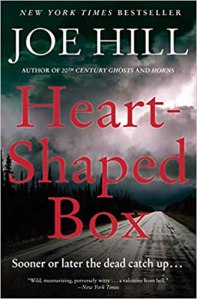 Jude Coyne, at the age of fifty-four, isn’t exactly in his prime. Not so much as the number of his years but the way he’s spent them. Jude is, or was, a hard-living death-metal rocker who likes to live life on the edge.  But he hasn’t made any new music for a while, not since most of his band have died. Doesn’t mean he’s changed his ways. He’s living in a farmhouse with a young girl thirty years his junior, who he calls Georgia. Not because that’s her name but because that’s where she’s from. He’s always called his girls by their states of origin, rather than bothering to learn their real names.  That’s just how Jude is.

Jude has a taste for the macabre, and possesses rather an esoteric collection of strange items, including a cookbook for cannibals, a used hangman’s noose, and a snuff film. So when he receives an invitation to purchase something strange and unusual, he decides to give the item a look. Imagine his surprise to discover a ghost for sale on a wannabe ebay site? How can he resist? He doesn’t, and makes a snap judgment to buy it now, so no one else can purchase it. The ghost arrives in the form of a suit, packed in a heart-shaped box. And now the fun begins.

When Jude receives the suit, his life changes forever. He will have to deal with his past in order to survive the present… or he may have no future.

This is not my first Joe Hill rodeo. He’s a really good writer, reminiscent of Stephen King. Not surprising, considering that’s his father. But that isn’t to say he’s an imitation of his father, because he isn’t. Far from it. Joe Hill knows how to tell a good story, and he tells it well. He can even take an outwardly unlikeable character like Jude Coyne and layer him in such a way that by the end of the book, you like him and are rooting for him. He draws on a vast knowledge of humankind and creates some memorable characters, including the ghost. He doesn’t sugarcoat his characters, and shows them with all their blemishes and flaws.

This book is a real page-turner, as you just can’t imagine what is going to happen, or what’s waiting up ahead on the road, and you’re really excited to find out what’s there. If you like ghost stories, you’ll love this one. Going to find more of his books and read them.