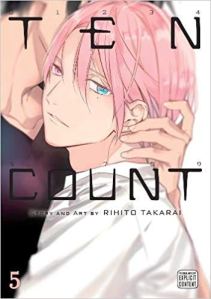 Shirotani and Kurose are rescued from their elevator ordeal and emerge into falling rain. Cabs are scarce, so Kurose says he’ll walk, but Shirotani speaks up and offers to share a cab with him, which is a major step for him. Once inside the cab, Kurose prompts Shirotani to continue with what he began to say earlier, but Shirotani claims not to remember what that was, when the reality is he doesn’t feel comfortable bringing it up in that place. A disappointed Kurose has the driver pull over and gets out, since they are right by his apartment.  As he waits for the elevator, he’s surprised to hear his name and turns to find Shirotani there. Shirotani gives him an obviously fake story as to why he’s there before finally making what is a major admission for him, even if it’s phrased hypothetically. They go up to Kurose’s apartment and Shirotani requests that Kurose “make him dirty inside”.

As a child, Kurose’s parents were very busy, and he was left on his own most of the time. He strikes up an acquaintance with an older man named Nishigaki, and begins to hang out with him, even if the man claims Kurose is a pain. Kurose doesn’t understand Nishigaki’s idiosyncrasies, why he makes Kurose follow certain rules. Too late, he begins to understand what Nishigaki’s problem is. When Nishigaki disappears, Kurose blames himself. He studies all he can about germophobes, and makes a promise to himself to save the next Nishigaki.

Shirotani wakes the next morning in a strange bed. Kurose is already up and is very attentive to him, anticipating his every need. Shirotani tells Kurose he’s filled in number ten on his list and wants him to guess what it is, so then Kurose has to tell him why he is doing this. Kurose says he has feelings for Shirotani, but Shirotani knows there is more to the story than that, that it has to do with his being a germophobe. Will Kurose come clean with Shirotani?

The story is almost done, one more volume to go, and it’s so good as Shirotani and Kurose’s relationship grows stronger and stronger.  Now we know more about Kurose, and why he was initially drawn to Shirotani. It almost feels like closure for him with regard to Nishigaki. But he also says that Shirotani being a germophobe is not the only reason he is drawn to him, that he would love him anyway. Shirotani hasn’t told Kurose about his father, and what he witnessed that helped to make him the germophobe he is now. Hopefully he’ll do it in the next volume.  Ideally, I would love to see them move in together, and have an open and loving relationship. I think they can heal each other. I’m crossing my fingers for them.

Only one more to go, can’t wait!