Grieving widower Arthur Kipps (Daniel Radcliffe) is sent on business to a remote region, leaving his son Joseph with the nanny. He promises Joseph they will be reunited in just a few days when the nanny brings him on the train to meet him. Arthur is a solicitor who has to go through all the papers left on an estate, which is a tall order indeed. On his arrival, Arthur gets the distinct impression that no one wants him there. His room reservations suddenly don’t exist, and everyone seems determined to put him on the next train back to London. But Arthur isn’t one to give up quite so easily. 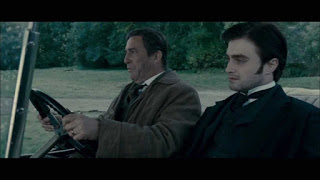 On the train, he strikes up an acquaintance with a man from the village, Sam Daily (Ciaran Hinds). Hitting it off, Sam invites Arthur to dinner the following night and Arthur agrees. The estate where Arthur is to work is sadly neglected and very desolate. And yet Arthur spies a woman on the property, one dressed entirely in black. On his return to the village, he happens to be at the constable’s office when two young boys bring in a girl who is in a bad way, having apparently drunk lye. Before Arthur can even think what to do, the girl dies in his arms. And now the villagers are more adamant than ever that he must go, that it’s his fault the girl died.

When he goes to dinner at the house of his new friend, Sam warns Arthur not to talk about children, if at all possible. He and his wife (Janet McTeer) lost their son, Nathaniel, and he doesn’t wish to distress her. But Arthur learns there is more to that story when, at the dinner table, Mrs. Daily talks of how her son liked to draw and still does and then proceeds to jab a knife into the wood table, gouging it severely before her husband calms her down.

Sam doesn’t believe in the supernatural, but since his wife’s death, Arthur isn’t so sure. And now he’s seeing and hearing things that make him wonder who is the woman in black, and what does she have to do with the deaths of the children?

I have to admit I wasn’t sure what to expect of this film, or of Daniel Radcliffe. I was just beginning to think it a run of the mill gothic when suddenly it wasn’t. And yes, I’ll admit I jumped at least once. The premise has been used before. We saw it in Dracula with Jonathan Harker going to Dracula’s estate in order to discuss legal matters with him. But this version sees Radcliffe as a grieving widower trying to deal with the loss of his wife while raising the son he loves more than anything.

This film has a definite Gothic atmosphere, and a rather creepy vibe as we watch Arthur become sidetracked from his duties by the mystery of the woman in black, whom he has seen more than once. And every time he sees her, another child dies. I really liked it, and definitely didn’t see the ending coming. Definitely worth the watch, I give it a pretty solid 4 stars.

Dr. Alan Feinstone (Corbin Bernsen) is a successful dentist with more than just a cleanliness fetish – he absolutely abhors anything that is even a little dirty. Finding out that his young blonde wife is cheating on him, with no less than the pool man, who is filthy and dirty by the very nature of what he does, sends Alan careening over the edge, spiraling into madness… and revenge.

While spying on the pool man at his neighbor’s house (she’s also carrying on with the man), the good

doctor is attacked by her dog, whom he dispatches with cold efficiency. Long overdue at the office, his 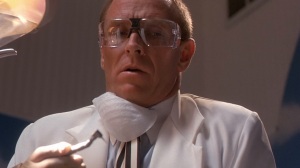 patients are growing impatient, and his loyal office staff is trying to placate them. When the doctor is finally in, he starts to keep his appointments, including that of a budding starlet, April Reign (Christa Sauls) who has been brought by her manager, Steve (Mark Ruffalo). Upset over the perfidy of his wife, the doctor hallucinates and begins to molest the poor woman while in the chair. He comes to himself to find her panty hose on the floor, her bra undone. He hastily tries to make repairs, but ends up shoving the panty hose under the table, and telling her manager to take her out for fresh air as she’s had a bad reaction to something.

As if things weren’t difficult enough, the doctor has been dodging calls from an IRS agent, until the agent shows up on his doorstep and can’t be ignored any longer. How will he deal with him, with so much on his plate?

Luring his unsuspecting cheating wife to his office under the pretext they are going out, he introduces her to a new chair he’s had installed at his office, and to a rather unusual producedure. Later he takes her home and wreaks vengeance on the hapless pool man.

The doctor can’t seem to catch a break, and people are catching on. So, like the Energizer Bunny, he keeps going and going and…

This was an interesting role to see Corbin Bernsen play, as I mostly known him from his stint as the sleazy divorce lawyer Arnie Becker on LA Law. I think he was already not too tightly wound from the beginning with his compulsions and his visions, but the discovery of his wife’s adultery caused him to snap. I think the strength of this film lies in trying to figure out just how far this crazy dentist will go to get revenge, no matter who gets hurt. Not a great film, but I do intend to watch the sequel. I’ll give it a solid 3 stars.