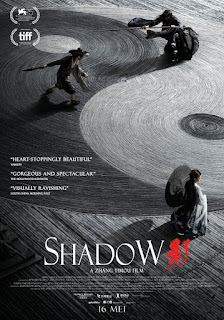 An uneasy alliance exists between the kingdoms of Yang and Pei. Yang holds Jing City, which by rights belongs to Pei. The king of Pei (Ryan Zheng) has no wish to go to war, and forbids his commander to do so. However, all is not as it seems. The man who presents himself as the commander is actually another man named Jing (Chao Deng). Years ago, the real commander’s father found him in Jeng City and noticed the resemblance to his son and raised him to be his shadow, training him to fight. The time has come, as the actually Commander has taken a turn for the worse, after being wounded some time before in a battle, by General Yang.

The king doesn’t seem to take the situation too seriously, much to the chagrin of his sister, the Princess (Xiatong Guan). The commander’s wife, Madam (Li Sun) is aware of the situation with her husband, who is hidden where the king cannot find him. She maintains the facade of her marriage to Jing/Commander, but it’s easy to see there is an attraction between them, although they both fight it. 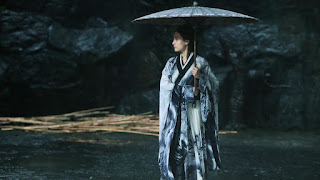 When Jing/Commander insists that they must take Jing City, and that he has challenged General Yang 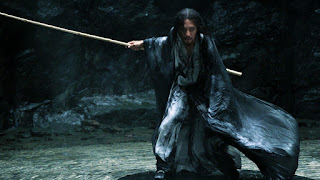 to a duel, the king strips him of his title, so Jing makes his departure, with or without the king’s blessing. In the meantime, his adviser Minister Lu (Jingchun Wang) has an offer from General Yang regarding the Princess. But he doesn’t want her as a wife, however he’ll take her as his concubine. A very insulting offer indeed, but the Princess accepts, in order to prevent further violence.

Shadow is a beautifully crafted and directed film by Yimou Zhang. Intrigue and secrecy abound, and the truth is not always easy to see. Jing is led to believe his mother is waiting for him in Jing City, as an enticement to get him to fight. The Commander himself, although not in great shape, helps to train Jing for what he needs to do, with the assistance of his wife, who actually comes up with a clever strategy for fighting involving umbrellas. Although a color film, it employs a black and white palette that is quite beautiful. Who will remain standing when the smoke clears? Ah, there’s the rub. 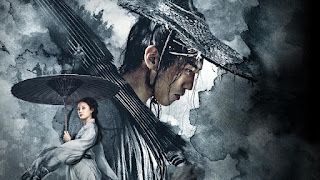 I give this lovely film 4 Stars.