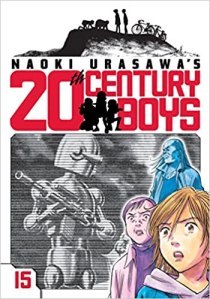 Despite warnings advising against it, the Pope’s visit to Japan is moving forward as planned, including the opening ceremony of Expo 2015. Brother Luciano has returned to his home of Italy, after spending some time in Argentina, arriving too late to attend the funeral of his friend and mentor, Father Perrin. He finds the priest’s desk in the same disorganized disarray he remembered. Searching through the mess, he discovers a particular book with a receipt, which he tracks down to a bookseller of antiquities. However Brother Luciano knows this is not an old book and traces it to its forger. He is confused as to why Perrin would trouble with such a book, which is jumbled and confused, containing prophecies such as history will end in 2015. Brother Luciano realizes Father Perrin believed in this book, and did not believe they would ever see 2016 because history would end in 2015.He takes his concerns to his Cardinal, who tells him he is very wrong, and hints that he should return to Argentina. When Luciano returns to his room to find it stripped of everything, he knows what he has to do.

Back in Japan, Detective Chono goes to work, only to be given the task of interrogating someone who doesn’t speak Japanese. But Chono doesn’t speak Italian. How is he going to get through to him? And why does this man sound so urgent… maybe even desperate? Meanwhile, the virus is spreading at an alarming rate and cautionary travel measures are being taken.

Chono gets in touch with Kanna, takes the strange man to her, although she isn’t sure why, but they go to the church and the man confesses to the priest. The priest believes his story and tells Kanna and Chono that the plot to assassinate the Pope is still on. And there is worse… someone thought to be dead has been seen alive by multiple people, including Otcho and Yukiji. Friend alive? How? Now it’s more imperative than ever that Kanna remind the gangs of their promise to stand behind her and protect the Pope. They know the assassin is #13, but can they track him down and stop him before he carries out his mission? And is it possible that Friend has prophesied everything… including his own resurrection?

This volume is intense, so much going on, and omg, Friend alive? What’s up with that? Why? It can’t bode well for anyone. The virus is spreading, the Pope is due to die, can this get any worse? Especially if Friend gets back in the saddle again, what can stop him? I loved this book, and can’t wait for the next one. Especially as… dare I hope it… something I’ve wanted, longed for, and yearned for… is about to come true!