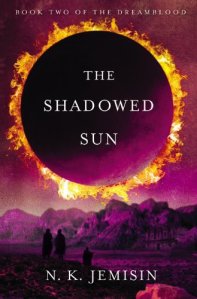 Hanani is a Sharer Apprentice. Sharers are similar to but different from Gatherers, in that they are healers who also go into the realm of dreams to help sufferers where the Gatherers ease the sleeper into a peaceful death. What makes Hanani unique among the Sharers is that she is a woman, and such a thing has not happened before. Which also means she is subjected to the scorn of some people for going against the perceived behavior of her sex, even among her fellow Sharers. Luckily for her, she has the support of her mentor, Mni-inh, to help guide her.

Wanahomen, son of Eninket, has been gone for some ten years, ever since his father’s overthrow and death at the hand of a Gatherer. Biding his time, he is gathering support so he can claim his birthright, and refuses to listen to those who claim his late father had gone mad and had to be killed. His eye on the prize, Wanahomen is willing to do whatever it takes to regain what was lost, no matter who gets hurt in the process.

Tiaanet’s mother, Insurret, is of the shunha caste, her father Sanfi a merchant. Tiaanet is extremely beautiful, and many men lust after her. But her father has his own ideas regarding her future, as well as his own ideas regarding their relationship. No wonder Insurret is waspish and surly, keeping to herself and away from Tiaanet as well as her  daughter Tantufi, who has… issues. But Tiaanet is a dutiful daughter, even when that duty is very distasteful to her, and she is also clever and knows how to handle people… except her father. As a supporter of the returning Prince, Sanfi sees nothing wrong in bedding his beautiful daughter with the handsome prince, as long as he’s in control of the situation Then again, he sees nothing wrong in sleeping with her himself.

Sunandi Jeh Kalawe now governs Gujaareh on behalf of the Protectors of Kisua. She is happily married to Anzi, a general who commands the forces of Gujaareh. But Sunandi has neither forgotten the events that led up to the death of the mad Prince Eninket, or the young Gatherer Nijiri, whose mentor/lover Ehiru was the one who killed Eninket.  When Nijiri comes to see her in the middle of the night, Sunandi knows something is up… and it’s not likely to be good.

Something is wrong in Gujaareh. People are dying mysteriously in their sleep, but the Gatherers don’t know why or how it happens. Turmoil is in the air, as forces align themselves. War feels imminent as Wanahomen works toward the overthrow of the current regime, that he may take his rightful place as ruler. But he needs the support of others to accomplish that.

Something big is just on the horizon… will it be the start of something new or the end of the life they now know?

As much as I loved the first book, I think I might love this one more, although I wish Ehiru had been able to come along for the ride. In the intervening ten years, Najiri has greatly matured, although undoubtedly carrying the scars of what happened and the loss of Ehiru. I was tickled to see Sunandi again. She’s such a strong character, and someone I would love to really know. Plus we get to meet interesting new characters, such as Hanani and Mni-Inh. Hanani is struggling to exist as a woman in a man’s world, and she does it wonderfully.  And then there is Wanahomen , who is older than when we last saw him. It remains to be seen if he has gained any wisdom or maturity.

N.K. Jemisin weaves an incredibly intricate tale, like a beautiful tapestry composed of the lives of her characters. The religion she has created feels so real, it’s hard not to believe that these things can’t happen in dreams, that such people as the Sharers and Gatherers don’t really exist. Her world-building skills are beyond belief. Her characters take on a life of their own, certainly not one-dimensional by any means. There is no cookie-cutter black-and-white dichotomy, good versus evil. For no one is entirely good, and no one is entirely evil. And bad things do happen to good people, and sometimes evil thrives.

For now, this is the last book in the series, but the author admits she would like to visit this world again. We can only hope she does, and that she’ll be willing to take us along on her next visit.

I highly recommend this book, and I intend to seek out her other stories. 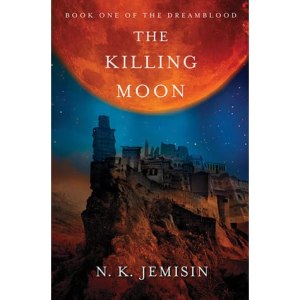 Guajareh is a city of peace, prospering under the loving guidance of Prince Eninket. Even in death is peace, for that is the job of the Gatherers of the city. They ease souls into Ina-Karekh through the most beautiful of dreams. The Gatherers serve the Goddess, Hatawa. They work primarily at night, under the auspices of the Dreaming Moon. One such Gatherer is Ehiru. He is given a commission to ease a man of the Bromarte, Charleron of Wenkinslan. But things do not go as they should, and Charleron tries to warn Ehiru that he is being used. Disturbed, Ehiru returns to the Hatawa, expecting to be reprimanded, concerned for his sixteen-year-old apprentice, Nijiri. Despite what has happened, though, he is given a new commission from the Prince himself, who is Ehiru’s brother.

Nijiri had been meant to have Una-une as his mentor, but the man’s untimely death has changed that, and he has been placed under Ehiru’s wing instead. Nijiri is not opposed to the change, although saddened by the reason, for he has deep feelings for Ehiru, despite the fact that his new mentor is forty years of age. He has known Ehiru for most of his life and would do anything for him. To Nijiri, age is immaterial, as well as gender, although he knows it is not allowed for Gatherers to indulge in such passions. But being near Ehiru and learning from him are enough for Nijiri.

Sunandi is from the neighboring country of Kisua, sent to Gujaareh by her master Kinja She Kalabsha to study Gujaareen magic as part of her apprenticeship. But that doesn’t mean that the two countries agree in the way they do things. Sunandi senses something wrong in Gujaareh. If only her master hadn’t died.  She finds Prince Eninket charming, and rather seductive. Doesn’t mean she trusts him. And she certainly can’t afford to let him find out what her true purpose is in being there.

Sunandi is summoned to a meeting with General Niyes, who shows her something shocking, and relates to her the strange events of the past few years. He tells her that war is imminent and that she must carry the news back to Kisua as soon and as stealthily as possible. He warns her that her life may be in danger, and the sooner she and her servant Lin leave the better.

That night, however, an unexpected presence turns up in her room—a Gatherer and his apprentice, whose purpose is to send her to Ina-Karekh. Sunandi makes Ehiru see that his so-called commission is nothing less than assassination, sowing seeds of doubt in his mind. When he becomes convinced that she is telling the truth, and that politics are at play here, he realizes he must keep her safe for the sake of all.

This book was recommended to me by my daughter-in-law, and I am so glad she told me about it! N.K. Jemisin weaves a fascinating world, a unique world, with many strange concepts and many people. At first, I was focused on remembering who was who and stumbling over the strange words and ideas, but suddenly I found myself very immersed in the story and the names became real people to me, and I realized I was hooked.

Ehiru is a very conflicted man, whose beliefs are crumbling around him, barely able to hang on, if not for the love and support of Nijiri. Nijiri is wise beyond his years, and it’s hard not to like him, as well as Sunandi. The author modeled much of the belief system and the countries in her novel after those of ancient Egypt, while also drawing on Freud and Jung. The concept of easing people into death seems meant to be a loving form of euthanasia, but obviously there is much room for abuse in such a system.

At the heart of this story is a tale as old as time itself—power and greed, the eternal struggle between right and wrong, life and death,  recognizing what is right and finding the strength and courage to do what must be done. I loved these people so much that I hated to see the book end. Good thing there are two more, even though the first one is filled with a fair amount of heartbreak. I will have to look for more of Jemisin’s books after I finish this trilogy. She is an awesome writer.