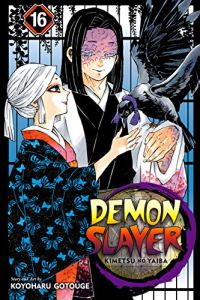 Tanjiro, Zenitsu, and Inosuke begin their training with Gyomei, the Stone Hashira. The regimen consists of three parts – training under the waterfall, carrying three thick logs, and pushing a large boulder one cho (about 110 meters).  The training is grueling but the three demon slayers push through it as best they can. Inosuke is happy, convinced that Gyomei is the strongest member of the Demon Slayer Corps. Tanjiro passes the first two parts, but is having difficulty in pushing the boulder. He feels as though it is pushing back at him. Meanwhile, Muzan is very intent on finding both Nezuko and Kagaya.

When Genya arrives, he and Tanjiro discuss the training, and he opens Tanjiro’s eyes to trying another technique. Following Genya’s advice, Tanjiro is able to push the boulder, finishing his training before either Zenitsu or Inosuke. Genya is impressed by Tanjiro, both for his accomplishments in training as for what he did for the Swordsmith village. Tanjiro modestly claims it was due to Nezuko, not him, thus earning more respect for his honesty. Now Tanjiro is ready to move on to his next training, with Tomioka.

Tanjiro finds Tomioka battling with Sanemi, the Wind Hashira who is also Genya’s brother. When Tanjiro asks if they are really fighting over candy, Sanemi becomes offended and attacks. In the meantime, Muzan has found Kagaya, who is in very bad shape! They have a long discussion during which Muzan attempts to justify what he is doing based on past grievances. This encounter does not end well.

When the Demon Slayers receive the news, they rush to their Master’s side, alas too late, and vow to end the existence of Muzan once and for all.

This was a very hard volume to read. It’s always hard to lose characters you come to love, and this was no exception, but neither was it the first time in this series. The Hashira have been struck a mighty blow, but at the same time the death of the Master has only strengthened their resolve to destroy Muzan. Tanjiro is becoming even stronger than ever, and I’m sure Zenitsu and Inosuke will be close behind. No Nezuko this volume, hope she’s doing well and we will see her again soon. I can only hope they will make Muzan suffer horribly before they kill him. The back stories are interesting and informative, as usual.

Good volume, looking forward to the next one. 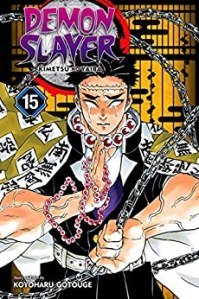 As dawn approaches, Tanjiro is concerned that Kanroji’s strength won’t last and the demons will get away once more. The demon tries to evoke Tanjiro’s pity and accuses him of preying on the weak. Realizing he needs to devour human flesh, the demon homes in on nearby humans. Oh no! Tanjiro attacks but his sword becomes stuck in the demon’s neck! What can he do now? Luckily, aid comes in the form of another blade, thrown to him for his use. He attacks the demons with renewed vigor. But now the sun has risen, and poor Nezuko wasn’t able to enter the shade! Oh no, she is lost forever now!

A miracle has occurred! Not only has the demon been defeated and Kanroji saved, but Nezuko is somehow able to walk in the sunlight safely! She hasn’t become human again, though. So is she in the process of reverting to human, or is she evolving as a demon? Whatever the reason, she now has a target painted on her back, and Muzan is determined to devour her so he too can walk in the sunlight.

Tanjiro is healing after the battle. The swordsmith village has been relocated. Luckily, they have spare villages for just such occasions. When Zenitsu returns, he is overjoyed to be able to see Nezuko in the sun and immediately expresses his desire to marry her. He is less than overjoyed, though, when she addresses him as Inosuke, as the boar-headed boy has drilled his name into her by repetition!

The Hashira meet to discuss what has occurred, but unfortunately the Master is too ill to join them just now.  They discuss the meaning behind the marks that have begun to appear, beginning with Tanjiro. Haganezuka visits Tanjiro as he recovers and brings his new weapon, which has been mounted on Rengoku’s hilt. Tanjiro admires the beauty of this blade, but Haganezuka is still salty that it was used before he was done with it.

And now begins the Hashira training!

A lot going on in this volume, but the most amazing and spectacular thing is about Nezuko being able to withstand the sun! How exciting is that? Hopefully she is on the road to becoming human again. But of course this means Muzan will be more determined than ever to catch her and consume her, so I’m sure we’ll see more of him from now on. I feel as if Tanjiro is coming more and more into his own, as he continues to rise in strength and ability. I bet before too long they’ll make him a Hashira. Is there anything stronger, I wonder? If so, he’ll be that too! I worry about the Master, hope he gets well soon!

Another great volume, looking forward to the next one! 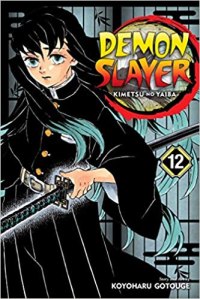 The upper echelon demons are gathering, no doubt to receive Lord Muzan’s latest instructions regarding the current situation. Apparently, they do not all get along, and even among so-called allies there is a certain amount of animosity and competitiveness as they attempt to curry Muzan’s faavor. Some of these demons are certainly less human than others and some are decidedly creepy. When Muzan announces the death of Gyutaro, Doma offers to gouge out one of his eyes as atonement for having brought Gyutaro and Daki to his lord’s notice. Muzan declines the offer. He tells them he sees them all as failures, having failed to live up to his expectations. The Ubuyashiki family is still alive and the blue spider lily has not been found. Gyokku claims to have information on the family’s whereabouts, so Muzan says once confirmation is obtained, he and Hantengu should go there.

Tanjiro awakens from what must have been a dream – or was it a memory – to find that he has been unconscious for two months. He asks after his friends and learns that Zenitsu awoke and was sent on a mission, and Tengen was up, but supported by his wives’ shoulders. Inosuke, on the other hand, was in bad shape. Tanjiro decides he must be hallucinating seeing  Inosuke on the ceiling, but it’s really him. Tanjiro inquires if a katana has come for him, as his was chipped in the recent battle. But all he has received is an angry letter from Haganezuka. It is suggested that Tanjiro go to see the swordsmith in person , and Tanjiro is surprised to learn how close the swordsmith village is. But getting there is far from straightforward.

On Tanjiro’s arrival, he learns that the swordsmith has disappeared and is being sought. Probably sulking, they assume, as that is often his way. Not because his sword has been damaged but because of what he perceives as his shoddy workmanship that allowed the sword to be damaged. While searching, Tanjiro encounters a rude Hashira bullying a small swordsmith, so he intervenes. Tokito, the Mist Hashira, insists on using the practice doll, although Kotetsu tells him it will break. But every action has its consequences, even selfish ones.

This begins the Swordsmith Village arc, and we are seeing the upper ranked demons in larger numbers than before. Their relationship to their lord is interesting to watch, and you know they are just jockeying for position in order to get closer to him. They’re feeling the pressure of his displeasure and will do anything to regain his favor. The swordsmiths are interesting. We see little of Inosuke this volume, and none of Zenitsu, but I’m sure they’ll be back soon. Muzan is an interesting study, cold-hearted demon that he is. In this volume, he was actually standing on the ceiling as he addressed them.  It’s always fun to watch Tanjiro battle, and he certainly has to keep his wits about him to defeat these foes. Hopefully he’ll be able to obtain the blood he needs to help cure Nezuko.