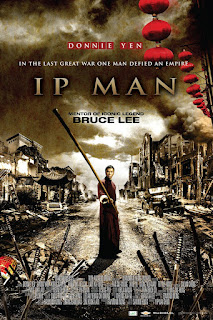 Fo Shan is a Chinese city renowed for its kung fu masters and their schools. The strongest kung fu master is Ip Man (Donnie Yen), who leads a quiet life with his wife and son and is much respected by the city. Possessing a strong sense of honor, he isn’t one to stand aside when some punks from up north come to town intent on starting their own school and beating up the other kung fu masters. Ip Man quickly teaches the bullies a lesson.

But the peace of Fo Shan is destroyed when the Japanese occupy the city, and much of the city’s population is decimated. Those who are left struggle to survive, including Ip Man, whose beautiful home has been confiscated. Having a family to feed, Ip Man goes to work shoveling coal. One day the Japanese arrive with a proposal, their interpreter being Ip Man’s friend Li (Ka-Tung Lam). Those who are willing to fight the Japanese in bouts of kung fu will receive a bag of rice if they win. These fights are for the Japanese general, Miua (Hiroyuki Ikeuchi), whose second-in-command, Colonel Sato (Tenma Shibuya) is a sadistic, bloodthirsty man with no regard for human life. When one of Ip Man’s friends, Lin (Xing Yu) suddenly disappears, Ip Man realizes he has been killed by the Japanese. He requests to fight ten men. But when he wins, he doesn’t take the rice, as that was never the reason for him to fight. 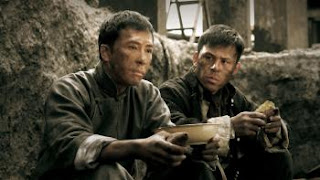 General Miura wishes Ip Man to fight again, but he is nowhere to be found. And Li says he doesn’t know where he is, no matter how much they hurt him. But things come to a head, when Ip Man realizes he has to take a stand. He begins by teaching the factory workers at his friend Quan’s (Simon Yam) cotton mill how to defend themselves. And then he agrees to fight General Miura, although Li warns him that if he should win, Sato will kill him.

This film was recommended to me by a co-worker and I loved it! Everything about the film is good, from acting to story to direction to cinematography. I love the fight scenes! Ip Man is loosely based on an actual kung fu master, one of whose disciples was actor Bruce Lee. There are three more films in this series and I intend to watch and review them all. Ip Man is a great character. I love the scenes with his family, showing that he isn’t necessarily perfect and has room to improve, which of course he does. I highly recommend this film and give it 4.5 Stars.