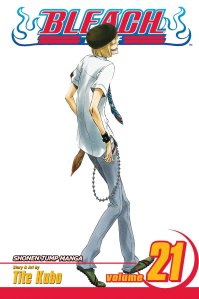 In the aftermath of Aizen’s dramatic departure (as if his being there isn’t drama enough alone), the 4th Squad tends to the wounded, including the Ryoka. Captain Unohana is amazed to witness Orihime’s healing skills as she tends to Ichigo. Rukia is stricken at Byakuya’s injuries, sustained while protecting her. He calls her to his side, and proceeds to tell her truths he has previously withheld.

A week passes. Uryu has sewn new clothes for his group, so Orihime wishes to personally take the new dress to Rukia… but she can’t find her. She and Ichigo begin a frantic search, even as some of the captains and lieutenants (including Shunsui, of course lol), at Matsumoto’s suggestion, get down to some serious drinking. They invite Ichigo and Orihime, but they decline the invitation, being busy (and also being underage). Ichigo has an idea where Rukia is, and he turns out to be correct.

The time comes for Ichigo and the others to return to the Living World. They drop from the sky only to find a penitent Uruhara waiting for them. Ichigo lets Kiskue know what he thinks of what he did to them. Before he left the Seireitei, Captain Ukitake gave Ichigo something special, told him to hold onto because it would be useful in all kinds of situations.

Ichigo arrives home to find Kon lounging in his bed. He reclaims his body and tells Kon he’ll listen to his complaints the next day, all he wants to do now is rest. But that isn’t happening when his dad unexpectedly appears, ready to rumble.

Back to school for everyone, back to normalcy. Or is it? Ichigo is shocked when Tatsuki can see his deputy soul reaper badge. But he has no time to think about it, as they keep getting calls about Hollows. On top of that, there’s a new kid in class. His name is Shinji (but I’ll refer to him as Dutch Boy). He takes a seat near Ichigo and hopes they will become friends! That’s not creepy at all, is it?

When Ichigo leaves in the middle of the night on Reaper business, leaving Kon in his body, Kon decides to take the opportunity to kick up his heels a bit, but he gets more than he bargained for. Uryu, who is also out and about, encounters an unexpected blast from the past. And if that’s not enough, a Soul Reaper’s true identity is revealed!

So… Captain Aizen… huh. That happened. Who saw that coming? I sure didn’t. I remember watching the anime and boohooing over “poor Aizen”. And then he wasn’t dead and I texted my daughter, overjoyed, only to be confused the next moment when he stabbed poor Hinamori. (My daughter said she couldn’t wait for that to happen, knowing what she already knew that I didn’t.)  So Aizen, Gin, and Tosen have vamoosed, off to nefarious things no doubt. I don’t believe they specifically say what’s up in the manga, but I remember Aizen telling the Soul Society that his plan would take a year and then he’d be back. I guess that was their way of explaining why the story was about to veer off into filler arcs lol

His departure is almost an anti-climax, as its back to normal business. Well, as normal as Ichigo’s world ever gets. There does seem to be a lot of Hollows, wonder if that means anything? And now we have Dutch Boy in the picture (when you read this volume, you’ll know why I call him that lol). And then a couple of major revelations at the end of the book, keeping us in suspense, waiting for the next volume. Pretty heavy stuff going down. Plus the revelation from Byakuya at the beginning.  As usual, another great volume of Bleach. One reason I love the manga so much, even though I’ve seen the whole series, is that you do learn things that either aren’t mentioned or go by too fast to catch. 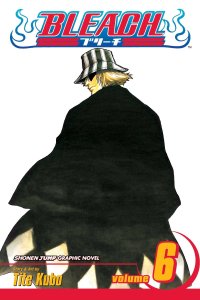 As Ichigo battles Hollows which Quincy Uryu Ishida has lured with his bait, Orihime and Chad awaken to find themselves safe, having been removed from the battle by a mysterious stranger in a striped hat. Chad demands to know what has happened, and what it has to do with Ichigo. Ishida is finding that his plan is going awry. He can’t kill the Hollows with just one shot anymore, alarmingly, and as his strength wanes, the number of Hollows only increases—not quite what he’d had in mind when he began the contest with Ichigo.

Rukia is dismayed to find that her strength is not what it should be. Suddenly beset by what she at first thinks is Ichigo, she realizes it is Kon clinging to her like a leech, she spots Ishida and learns that this sudden infestation of Hollows is his fault and wants to know what he was trying to prove. Meanwhile, Kiskue is revealing the truth about their powers to Orihime and Chad, and how they were activated. Seeing their skepticism, he invites them to come along with him and see for themselves.

Ichigo has finally caught up with Kon and is furious that he didn’t do what he sent him to do, which was to retrieve Rukia’s thingamajig. Ishida is still intent on having Ichigo as his opponent, but Ichigo notices the ominous cracks in the sky. As they watch, Rukia explains to him about the Quincies and why they had to be destroyed.

Despite everything, Ichigo wants to work with Ishida, not against him. Ishida explains why he hates Soul Reapers so much, and Ichigo explains about the death of his mother, and his own war against Hollows. Can these two work together to defeat the Hollow horde? And what the heck is a Menos Grande?

Should they be frightened?

There is a lot going on in this volume of Bleach. Since I’m watching the anime (although I’ve way ahead of where I’m reading), I find it interesting to note things in the manga I would have liked to see in the anime. Such as the scene with Kiskue and Orihime and Chad, where he explains about their powers. Watching Ishida and Ichigo learn to work together is great, as they both have issues to work through, mostly Ishida. Ichigo, for the most part, is pretty laid back, and takes things in stride. Ishida, on the other hand, is rather high-strung and nervous.

The fight against the Menos Grande is pretty awesome, not to mention we get to see more of Kiskue Uruhara and Tessai, although there is much we don’t yet know. I loved seeing Rukia and Ishida assimilate with their schoolmates, and the first appearance of Mr. Yoruichi is priceless.

Another great volume of Bleach, looking forward to more of the same!