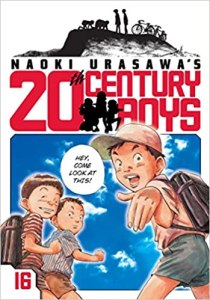 Fukube has always wanted to be a part of Kenji and his group, but has always been passed over and overlooked. In an attempt to get an in with them, he collects a great deal of manga. When Kenji’s new issue of Shonen Sunday turns up ruined, Fukube invites the guys over to his house to read his collection. Things seem to go well, but even so, he is devastated when they leave him to work on their secret clubhouse, and never invite him. Waiting for a time when the guys aren’t there, Fukube breaks into their clubhouse, where he is discovered by Sadakiyo, the creepy kid in the mask who has nothing to say. Finding Kenji’s Book of Prophecy, Fukube boasts that he can make better prophecies, and his are all going to come true. Fukube offers to be Sadakiyo’s friend, but on one condition. The other boy is not to call him by his given name at all… just call him his Friend.

The boys are all excited about the Expo in Osaka, Fukube boasting that he would be there all summer and would go to the Expo every day. But things don’t work out, and he not only can’t go, he doesn’t dare show himself around town, since that would mark him as being a liar. It’s a long hot summer for him, until he borrows Sadakiyo’s mask so he can get out of the house for a little bit. When Sadakiyo suggests they play at the haunted house on the hill, where no one will see them, Fukube gets an idea of how to frighten Kenji and the other boys.

Yamane approaches Fukube, trying to get back in his good graces, wondering if he is still rejected. The two boys run across a street vendor, who really has nothing to offer them that they are interested in. But they discuss Fukube’s idea of a man with a briefcase who travels around spreading a virus, to the shock of the salesman. It’s not until the strange kid bends one of his spoons, using just his mind, that the man becomes interested and gives the kid his card, telling him to look him up. And this man turns out to be none other than Manjome.

Meanwhile, in year 3 of the Friendship Era, Otcho is being hidden and taken care of by a young boy, whose sister quickly learns his secret. Funny thing, but everyone who owns a TV is ordered, by law, to turn the TV set off at the end of the broadcast day. When Otcho and the kids don’t do that, they hear a lady’s voice with an important message.

This volume differs from the others in that now, finally, we are inside the mind of Fukube, otherwise known as Friend, watching the development of the Friend persona. While it’s very easy to say that Kenji and the boys are at fault for being mean and not befriending him, I think it’s not that simple. There is something seriously not right about that boy, and when he lets his guard down, you can see glimpses of something evil. After all, how normal is it for someone to wish to destroy an entire world, and how egotistical to even think he can do so?

What I was excited about in the last volume hasn’t come to pass yet, but that’s because we shifted gears in this volume. I still believe it’s going to happen, so I’ll be patient. I can’t tell if we’re getting closer to the truth or not, but it seems that way. I’m waiting to see Kanna’s mother make her anticipated entrance. At least we know now she is one of the good guys, rather than the flake we assumed she was after dumping baby Kanna on Kenji’s doorstep. Another great volume, can’t wait for more.