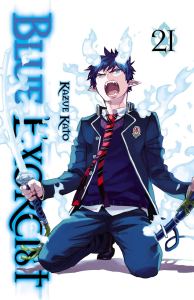 The public is starting to “see” monsters! What the heck? At an emergency meeting at the Prime Minister’s residence, Lightning reminds them that Mephisto’s barrier is set to expire in February. When Sir Pheles arrives, he tells them they have to quit avoiding reality, then schedules a press conference for that afternoon. He has Shura assigned to him as security, and refers to her as the “beautiful boobalicious exorcist.”

At the press conference, the Prime Minister refers to “an anti-social organism,” as being the cause of the problem. Waiting in the wings, an amused Mephisto faces an angry Yukio Okumura, who wants him to admit he knew all along about Yukio’s flame, like his brother’s. But Mephisto refuses to rise to the bait and strides to the podium to inform the public of the existence of demons, only to be shot…

Rin watches the shocking scenario on the television and rushes to his brother’s side. Meanwhile, Shura is pointing out to the authorities who have scooped Yukio up that he can’t possibly be the shooter and they are allowing the actual shooter to escape! Thanks to Mephisto’s injuries, however, the Gehenna barrier collapses! Rin is struggling to make sense of what has happened, and why Yukio is so determined to know the truth of their birth. Is it possible he has inherited the Satan gene as well?

Rin goes to Yukio’s rescue and attempts an escape! But things do not go as planned, and everyone’s favorite double agent is on hand to add to the confusion. When the Koma sword breaks, will Rin survive?

All I can say is wow, just wow. So much going on here. It’s literally mind-blowing. I can usually tell how things will work out, but right now I can honestly say I have no clue. Yukio is undergoing his own personal trials, but so is Rin. Is Shima taking advantage of the confusion to press his own agenda? What is his agenda? I keep wondering if this is all an elaborate set-up, whereby Yukio infiltrates the other side. He’s got the brains and determination to do something like that. Rin, not so much. But I can’t tell. And what a cliffhanger too, just as Mephisto is about to spill the beans to Rin about his and Yukio’s birth.

What agony, especially not knowing how far away the next volume is. A riveting volume, a real page-turner, and one calculated to keep you on the edge of your seats! Please, next one soon!