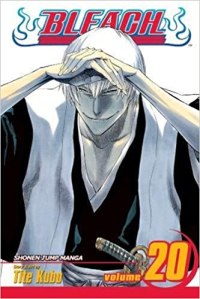 When Matsumoto comes face to face with Kira, she learns what the power of his zanpaku-to, Wabisuke, really is.  Kira’s sword doubles the weight of anything it strikes, until the user cannot wield it and sinks to their knees, head in a penitent pose.  (Wabisuke means the Penitent One).

Hinamori is confused as to why Gin has brought her to the place where the 46 govern. But all is explained when she comes face-to-face with the last person she expected to see there. How can this possibly be? But the joyful reunion is brought to a sharp halt.

When Hitsugaya arrives, he too is thunderstruck to see the newcomer then chilled when he learns what has happened to Momo.  Battle is inevitable. It isn’t long before Unohana and Isane appear, having deduced this person’s whereabouts, and we learn what power he really possesses. One which has fooled many people for a long time. Except maybe Tosen, who is immune to it, being blind. Which means he has done what he did with knowing consent. Has everyone been subjected to this? Maybe the Ryoka are immune. Hopefully.

When the traitors disappear, Unohana deduces where they’ve gone and tells Isane to send a special message to all the captains and lieutenants, as well as the Ryoka, to assemble immediately… it’s an emergency!

The newcomer confronts Renji and Rukia and demands that Rukia be given to him. Naturally, Renji refuses. And just in the nick of time, Ichigo appears. More battle is inevitable, and along with it, much is learned, including the secret  of the object known as the Hogyaku. Where before, the object of the Thirteen Court squads was to defeat the Ryoka so that Rukia could be executed, now the common goal is to reclaim her from the newly revealed enemy in their midst.

There’s a lot going on in this volume, so put on your hip boots and wade into it. Don’t be surprised that things aren’t what they seem. You just can’t believe your eyes, apparently. And some people aren’t to be trusted. I think one character said it very well when he said, “Adoration is the state furthest from understanding.” I think that’s just another way of saying love is blind.

Lines will have to be redrawn, foes become enemies and enemies foes. Many things we’ve wondered about will become clearer, such as Kiskue’s place in the scheme of things, and a better understanding of Ichigo’s Hollowfication. The one thing that rather bugs me about this book is Rukia’s limp, wishy-washy attitude. Normally, she’s an in-your-face, don’t-mess-with-me kind of girl, but here she is almost a willing participant in what is going on to happen, as if she’s resigned to it or something. Maybe there’s a logical reason for this, but if there is, I don’t know what it is. Guess I’ll have to wait and see if she gets back the old Rukia spark.

Speaking of sparks, I suspect plenty will be flying in the next volume. Looking forward to it!