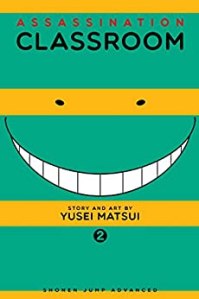 A new teacher arrives at Kunugigaoka Junior High, a rather buxom young woman named Irina Jelevich. For some reason, she is hanging all over Koro Sensei, to the confusion of his students. Nagisa continues to document the teacher’s weaknesses so that they can use them against him and assassinate him, which will prevent him from blowing up the earth. But Irina is not really a teacher. She’s been brought in as a professional assassin! Karasuma insists she maintain her cover and teach the students, but Irina is sure she’ll be able to achieve her goal of assassination on her first day with the class.

The students dislike her from the get-go and deliberately mispronounce her last name as Hellabitch. When her teaching skills are found to be lacking, they yell at her to get out, they need to study for their college entrance exams.

All the students, including Class 3E, must attend student assembly. Koro Sensei even attends, in “disguise”. But the rest of the school is determined to humiliate Class 3E, even to the point of withholding vital information. But they haven’t counted on the ingenuity and speed of Koro Sensei, who saves the day! The treatment of Class 3E is all due to the machinations of the school’s principal, Asano. He believes that by holding the class up as examples of what not to be, and treating them badly, he will scare the other students into doing well for fear of ending up like them. He is one of the few who know the truth about Koro Sensei, and refuses to listen to arguments that he should treat Class 3E better, claiming that if the world isn’t going to be destroyed, he has the future to consider.

Exam time arrives, and Koro Sensei announces he wants his entire class to score in the top 50! Even if the principal is giving the other students unfair advantages. Can they do it, even with his accelerated teaching techniques?

It’s time for a school trip – three days and two nights in Kyoto! Koro Sensei makes an enormous travel guide for his students that should cover anything that comes up during their trip! However, some of the girls in his class have been targeted by some unsavory characters and find themselves in a peck of trouble!

In this volume, we are introduced to the charming yet obnoxious principal of the Junior High. His disdain for Class 3E is incredible and his treatment of them is beyond abhorrent! Also, we meet Irina Jelevich, who doesn’t exactly endear herself to the students, and who uses her two biggest assets to lure her targets to their doom. There’s also a bonus story about Koro Sensei and a particular bun!

Great volume, look forward to the next one!