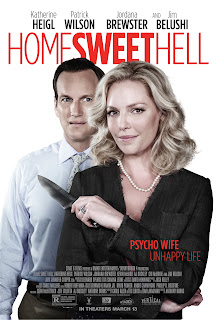 Life seems sweet for Don Champagne (Patrick Wilson). He has a successful home furnishing store that he runs with his partner Les (Jim Belushi). He has a beautiful wife, Mona (Katherine Heigl) and two great children. But life in suburbia isn’t what it appears to be. A pretty young thing named Dusty (Jordana Brewster) applies for a job at the store, and he hires her, to Les’ delight, because Les’ wife has Crohn’s disease and he likes to have eye candy to look at when he’s working.

Mona is rather controlling of  everything in their lives. She even has a book of goals she means them to achieve, and she schedules everything, including their lovemaking. Starved for attention, Don is an easy prey for Dusty, and he begins a torrid affair with her. But when she turns up pregnant, now it’s a whole new ballgame. What’s a guy to do?

The premise of this movie is an interesting one, what with Mona doing the dirty deeds that Don can’t 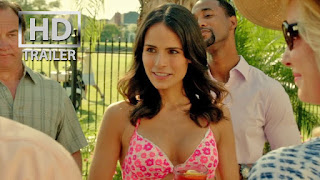 find it within himself to do. But at the same time, there is something that doesn’t quite ring true in this dark comedy.  It’s slow to find its pace and the acting is somewhat stereotypical. Mona is unlikeable – too controlling and too psycho. It’s hinted that she suffered some sort of trauma as a child but when Don asks her about it, she gets defensive and warns him that if he asks her that ever again, she’ll end him.

Jim Belushi’s character spends most of his time drunk and whining about his poor wife with the Crohn’s Disease (and btw, those jokes are very insensitive and not funny) Jordana Brewster, whom I haven’t seen since she was in As the World Turns, plays a femme fatale with an agenda but no real personality. And Kevin McKidd is Dusty’s boyfriend’s friend, Freeman. Typical thug types.

I didn’t dislike the film but I feel it could have been better. If you’re like me, you’ll google the ending to figure out what happened. Guess there won’t be a sequel. I’ll give this 3 Stars, mostly because I like Patrick Wilson.

The Conjuring 3: The Devil Made Me Do It 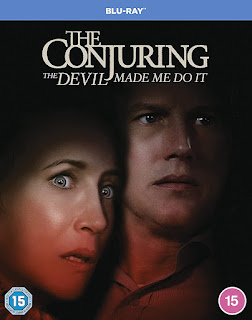 Ed (Patrick Wilson) and Lorraine (Vera Farmiga) Warren are a married couple who know a little something about demonic possession. Called to assist with the exorcism of an 8-year-old boy David Glatzel (Julian Hilliard), they are successful in ridding him of his demon… but only because the demon has unknown to them transferred itself to Arne Johnson (Ruairi O’Connor). Arne invited the demon in to save David. Be careful what you ask for. After returning home, he ends up getting into an altercation with his friend Bruno (Ronnie Gene Blevins) and kills him. Up on trial for the murder, Arne’s lawyer pleads not guilty…by reason of demonic possession. The Warrens have to prove this is so.

The Warren’s search for the truth is hampered by Ed’s ill health when he suffers a serious heart attack. But nothing will stop Ed in assisting with the investigation and looking after Lorraine.

This is the third film in the series about real life paranormal investigators Ed and Lorraine Warren. I 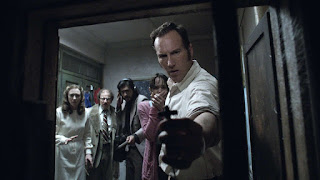 can’t vouch for how accurate the films are compared to the real couple, or how much of the stories are true. But they are interesting. And again, we have Patrick Wilson to look at. Nuff said. I don’t find this series as scary as Insidious but I do enjoy them. I have another Annabelle movie to watch and the Curse of La Llarona (from the same universe). I would recommend the series as worth watching. Also, look for actor John Noble in this one.  I’ll give this film 3.5 Stars.