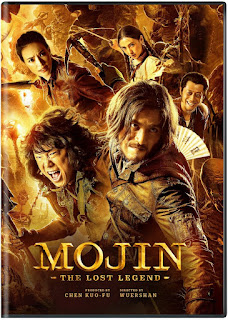 In ancient times, a Chinese emperor who was strapped for cash allowed for the formation of the Mojin Xiaowei, official tomb raiders who would enter tombs to “borrow” gold for the use of the emperor. The practice has carried into modern times.  One group consists of Hu Bayi (Kun Chen), Wang Kaixuan (Bo Huang) and Shirley Yang (Shu Qi). Twenty years previously, Hu and Wang and another partner, Ding (Angelababy) found themselves in a tomb with their fellow party members. The three wished to leave the tomb but the others foolishly decided to destroy the statuary, which did not end well and brought about the death of Ding, whom both men were in love with. Twenty years later, another bad scenario causes Hu, Wang, and Shirley to leave China for New York City, but life is not good and Hu decides to quit. 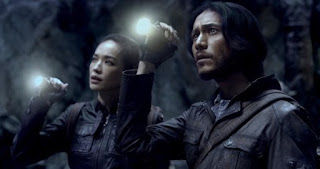 Wang tries to carry on, but it’s not easy when you’re only one person out of three. However, he is

enlisted to go to China to search for the Equinox Flower – the same flower that was involved with the death of Ding. He tells Hu, who says he isn’t interested, so Wang goes on, hoping Hu will follow, which he and Shirley do. Leading this new group is Sister Hong (Xiaoqing Liu), head of a global corporation who is determined to find the flower for altruistic purposes. The Mojin trio find themselves in the same tomb where Ding lost her life, Is history about to repeat itself? Can the ghosts of the past truly be laid to rest? 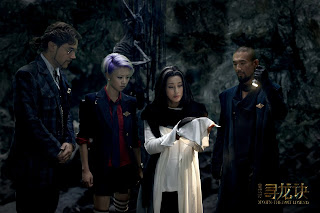 This was a fun movie to watch, reminding me of Raiders of the Lost Ark but with even deeper roots in Chinese history. I loved the dynamics between the main characters, and the love/hate relationship between Hu and Shirley. You just knew that when push came to shove, neither would abandon the other one. Same with Hu and Wang, longtime friends. I watched one of the bonus selections about Kun Chen in which they dealt humorously with their relationship and suggested the actors were together. The movie was exciting and action-packed and did not actually delve into the realm of disbelief – it all made sense. I understand, unfortunately, that the Mojin Worm Valley did not fare so well, being not exactly a sequel or a prequel and having been recast for some unknown reason. The reviews are really bad, so I’ll pass on that. I do recommend watching the Lost Legend, and I’ll give it a solid 4 Stars.