Detective Dee and the Mystery of the Phantom Flame Following the death of her husband, Empress Wu (Carina Lau) has been regent, but now she is to be inaugurated as empress. An enormous statue is being constructed for the occasion, but it’s imperative that it be completed on time. However, during an inspection of the statue, an official goes up in flames, burned to death. But how? The Empress’ chaplain, speaking through his special deer, suggests that Detective Dee be put on the case. But Detective Dee has been imprisoned for the past eight years, following his denouncement of the empress’ regency!

Under the watchful eye of Pei Donglai (Chao Deng) and Shangguan Jing’er (Bingbing Li), Detective Dee (Andy Lau) is placed in charge of the investigation, but only after the second mysterious flaming death.  Jing’er has been given express orders from the Empress to guard Dee, while Pei mistrusts him immensely. There are those who believe the deaths were caused because the men were disrespectful of the talismans placed on the statue. But Dee doesn’t subscribe to that particular theory. Yet he’s at a loss to explain their spontaneous combustion. Can he solve the mystery before the scheduled inauguration? 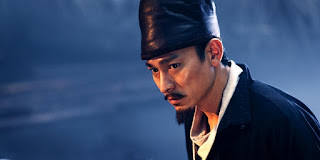 This is definitely a very interesting whodunit, with a lot of twists. Detective Dee is a great character, 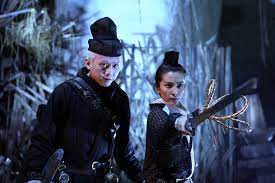 unconventional and yet very steadfast in his loyalties, remaining true to his principles. I wish there were more movies featuring Andy Lau as the detective, but the next two films are actually prequels about the younger Dee. I’ll watch them too, of course.

I loved the action sequences, the story was well-written, and I felt the film had great direction. All of the actors did a good job, but I especially enjoyed watching Andy Lau. This was a fun film to watch. I give it 4 Stars