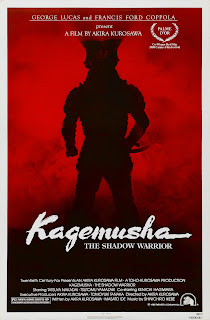 In the time just before the Edo Period in Japan, rival war lords known as daimyo were often at each other’s throats, vying for supremacy. One such lord is Shingen Takeda (Tatsuya Nakadai), while his fiercest competitors are Ieyasu Tokugawa (Masayuki Yui) and Oda Nobunaga (Daisuke Ryu). One of Shingen’s commanders is his brother Nobukado (Tsutomu Yamazaki), who resembles him to such a degree that he sometimes takes his place in the field. One day, purely by chance, Nobukao runs across a petty thief who is about to be crucified and looks even more like Shingen than he is. In fact, they could be twins. So he brings the thief back with him, thinking he’d be useful as a double for the war lord.

The thief (also played by Tatsuya Nakadai) grudgingly accepts his role as double. His presence becomes even more crucial when Shingen is shot in battle. It’s imperative that his enemies not know. When the war lord dies, the thief is thrust into the position of the new war lord and has to learn about a whole new life. Nobunaga and Tokugawa begin sniffing around at rumors that Shingen is dead, trying to learn the truth. Shingen’s son Katsuyori (Ken’ichi Hagiwara) is itching for war but cooler heads prevail. He might be a little salty since he is not his father’s heir, rather his son Takemura (kota Yui) is. He realizes his father is dead but has to pretend otherwise. The angry Katsuyori heads off to take a castle on his own. When Shingen/thief discovers this, he feels he has no choice but to support his “son”: 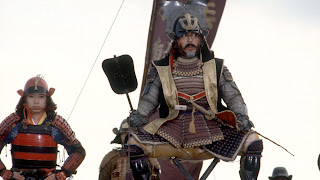 .Inevitably, the truth comes out, and now the battle begins.

This film is one of Kurosawa’s finest. It’s big and beautiful, with the most amazing cinematography and music. The role of the thief/double was originally given to actor Shintaro Katsu (best known for playing Zatoichi, the blind swordsman/masseuse), but creative differences ended that and Nakadai received the role instead. The production ran out of money before the film was finished, but thanks to a little help from Francis Ford Coppola and George Lucas, they persuaded Twentieth Century Fox to come to Kurosawa’s aid, and the rest is history. 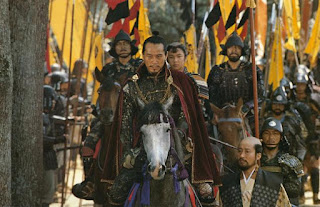 In a historic note, less than thirty years later, in 1601, the Battle of Sekigahara cemented Tokugawa’s 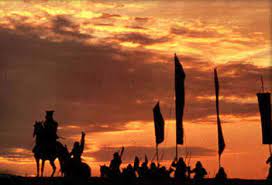 position as shogun, and the family would continue to rule for the next 250 years. Kagemusha is a very rich film, and Nakadai gives a stunning performance as the poor thief, caught up in a world he never wanted to be a part of, but his devotion to Shingen during the brief time of their acquaintance led him to do what he considered to be the right thing. I give this film 5 Stars