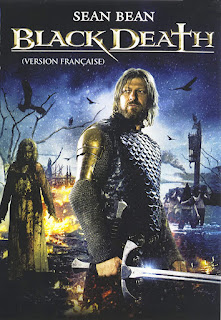 The year is 1348, and the bubonic plague – aka the Black Death – has England in its thrall. Osmund (Eddie Redmayne) is a young monk who lives with his fellows under the leadership of their abbot (David Warner). But Osmund has a secret – he is in love with a young woman named Averill (Kimberley Nixon). Fearful of the plague, she tells him she is leaving and wants him to come with her, but he says he cannot leave just like that. She says she will wait for him every day in a certain spot for a week and hope he comes with her

A group of soldiers arrives, led by Ulrich (Sean Bean). He tells the abbot of a place that is supposedly free 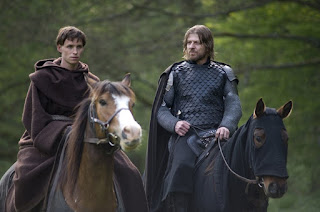 from the plague because the people there practice necromancy and witchcraft. He requests one of the monks guide them there, but the abbot assures him none will. However Osmund volunteers and leaves with them the next day.

After witnessing something on the road, Osmund is not so sure of his traveling companions. They make camp for the night, and early the morning he sneaks off to find Averill. But instead, he encounters a group of mine who end up ambushing the soldiers. They blame Osmund for what has happened and the loss of one of them. 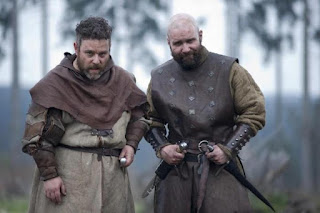 Continuing their travels, the group runs across a village where, once they establish that they come in peace, they are welcomed with open arms. But Ulrich is suspicious. There is no sign of death here, as in the other villages they passed along the way, no over-filled cemeteries, no great despair. Why do the women outnumber the men? Osmund is still in mourning when he is shown a great secret which he can scarce believe. Could it be? But how? 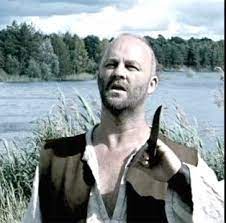 One of the more interesting aspects of this film (outside of the obvious, such as Sean Bean and Eddie Redmayne) is the good vs evil trope which is not as clear-cut as one might think. Fanatics come in all sizes and shapes and beliefs. The one thing they have in common is that each side thinks it’s right. The beliefs may differ but the solutions they use to achieve their ends is pretty much the same. Sean Bean is great, of course, as the pious Ulrich who is determined to cleanse evil in the name of his God, and Eddie Redmayne as the pious monk is also good. Look carefully at the woman in charge of the village, Langiva, you might recognize her as one of Sean Bean’s castmates from Game of Thrones. In fact, she played the horrible Melisandra. And the headman of the village, seen above, is Tim McInnerny.

The atmosphere of the film captures the time well, in my opinion, and it is a well-paced, well-told story. Some scenes are not necessarily for the faint of heart, though. I’ll give Black Death 4 Stars. 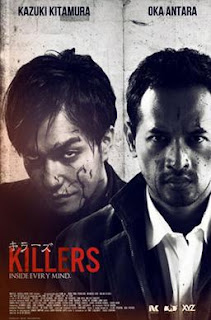 Nomura (Kazuki Kitamura) has a lot of money as well as time on his hands… and a sadistic streak a mile wide. As evidenced by the lady with the plastic bag over her head who he has bound and secured in his own private torture chamber. She isn’t the first, though, nor will she be the last. He films his torture sessions and uploads the videos for all to see. Wearing a mask, of course, to conceal his identity.

Bayu (Oka Antara) is a journalist of the crusading variety, who is determined to reveal ruthless

businessman Dharma (Ray Sahetapy) for the cruel bastard that he is. Things at home aren’t going well either, ever since he moved out of the home he once shared with his wife and daughter. Now Bayu’s father-in-law seems to be trying to move a new man into Bayu’s place. Bayu finds himself on the wrong end of a kidnapping by two men who definitely intend him harm. But a virtual comedy of errors leaves them dead and him alive. Having seen similar videos, he instinctively takes his phone and records the scene, then goes home and uploads it under an anonymous user name.

Bayu is shocked when someone messages him and warns him that he is too easy to find, he needs to use another IP address next time. Confused and fearful, Bayu replies to the stranger, in spite of his instinct not to, and they begin a conversation that carries over into a video chat. The other man is wearing a mask, so Bayu won’t be able to identify him, but the man is none other than Nomura, thrilled to find someone else like him.

And so their relationship begins….

Killers is about two killers who do similar things but from different motives. Nomura enjoys the thrill of the kill. He only seems to come alive when he is killing. On the other hand, he finds himself having feelings for a girl he meets named Hisae (Rin Takanashi)   who owns a flower shop. She has an autistic brother, Souichi (Tensui Sakai), and Nomura finds himself giving the boy life lessons. Probably not an ideal situation. On the other hand, Bayu’s victims have done things that are wrong, so he is more of an avenger than Nomura.  Both men find it difficult to balance the separate halves of their lives. Nomura even warns Hisae to stay away from him, but she doesn’t listen, concerned about his influence on her brother.

This film is both dark and intense, and very well done. The acting is top notch, as is the direction, and the writing. It examines the question of doing evil for good reasons, and what price is too high to pay. Be aware this film is not for the squeamish. I give it 4.5 Stars.