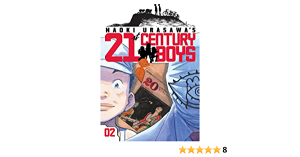 Time is ticking away! If they don’t figure out where the remote control for the giant robot is, it will press the button that detonates the anti-proton bomb, and all of mankind will die! Kanna tries to force her way in to see Kenji, saying she knows the remote is in the secret headquarters. But the guards won’t let her pass, since Kenji has gone into the game and is not to be disturbed. Will he find the answers he seeks in the past and will Kanna find him in time to stop the bomb?

And now we reach the climax of our story. Twenty-four volumes have brought us to this point. So much going on as the threads come together and complete the picture, and Kenji finds his answers. It just goes to show that even one small act can have dire consequences. Kenji isn’t the only one who learns this. Manjome too wishes he could undo what he did before, but alas, he cannot. However he can try to help Kenji as best he can.  Watching Kenji interact with his younger self was fun.  Watching the drama unfold as everyone tries to save the world was great. And at the end, balance is restored, and life goes on.

This was an amazing series, and I enjoyed the journey. Hope you enjoyed it as well. See you in the next series when I start to review Pluto.